The Under-19 pace bowling sensation Kamlesh Nagarkoti has been ruled out of the tournament with a foot injury. 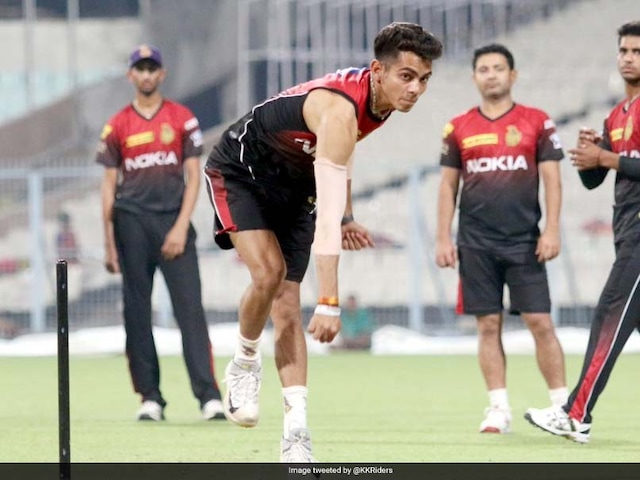 KKR shelled out Rs 3.2 crore to secure the services of Kamlesh Nagarkoti at this year's auction.© Twitter

Kolkata Knight Riders have been dealt a major blow in the early stages of their IPL 2018 campaign as their Under-19 pace bowling sensation Kamlesh Nagarkoti has been ruled out of the tournament with a foot injury. The 18-year-old has been replaced by Karnataka speedster Prasidh Krishna. According to several media reports, Nagarkoti had picked up the injury before the start of the tournament as the franchise made Prasidh play in two practice matches. Prasidh made his first-class debut for Karnataka in 2015, picking up a five-for against Bangladesh A in Mysore. The right-arm pacer has featured in 19 List A games, picking up 33 wickets. He was recently a part of Karnataka's campaign in the Syed Mushtaq Ali Trophy.

KKR shelled out Rs 3.2 crore to secure the services of Nagarkoti at this year's mega-auction. The franchise lost their star bowler in the form of Mitchell Starc, who was ruled out with a tibial bone stress.

Their another lead pacer, Mitchell Johnson, had to sit out of their game against Chennai Super Kings, with a niggle and now they look almost depleted as become their bowling resources are concerned.

With all these injury concerns and R Vinay Kumar's dreadful form, the two-time champions will hope that the young pacers in Tom Curran and Shivam Mavi will step up and play the role of the teams' strike bowler.

Kolkata Knight Riders (KKR) will look to get back to the winning ways when they take on in-form Sunrisers Hyderabad (SRH) in an Indian Premier League game at the Eden Gardens on Saturday.

Comments
Topics mentioned in this article
Kolkata Knight Riders Kamlesh Nagarkoti Indian Premier League 2018 Cricket
Get the latest Cricket news, check out the India cricket schedule, Cricket live score . Like us on Facebook or follow us on Twitter for more sports updates. You can also download the NDTV Cricket app for Android or iOS.