IPL Highlights, RCB vs MI: Virat Kohli who scored a brilliant half-century on his return to the IPL 2017 was over-shadowed by Kieron Pollard's innings. 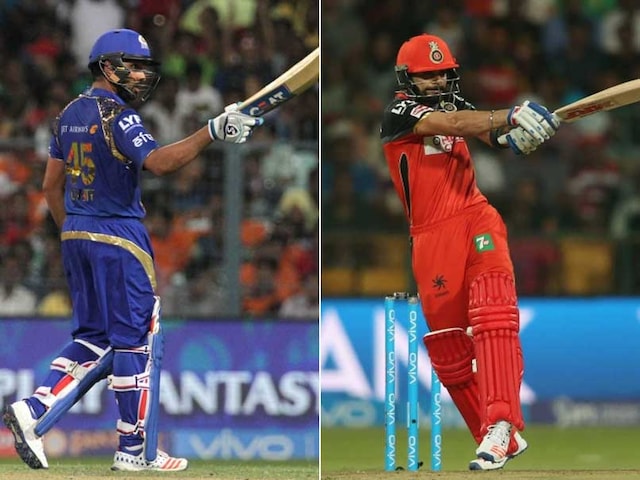 Despite the heroics from Samuel Badree, Mumbai Indians(MI) chased down an average score of 142/5 made by Royal Challengers Bangalore in the M Chinnaswamy Stadium in Bengaluru on Friday. This win is the third consecutive one for Rohit Sharma and his team and second consecutive loss for RCB. Kieron Pollard's 70 and Krunal Pandya's 37 not out helped the visitors salvage the match for the visitors. Down to 9/4 early in the innings, Pollard and Krunal Pandya batted smartly and held the fort. Virat Kohli who scored a brilliant half-century on his return to the IPL 2017 was over-shadowed by the fifty made by Pollard. Kieron Pollard was adjudged the Man of the Match for scoring 70 runs off 47 balls with 5 sixes and 3 runs. (Scorecard)

Catch all IPL highlights between RCB and MI straight from Bangalore​.

19:45 IST: Stay tuned for the next match between Gujarat Lions and Rising Pune Supergiant live from Rajkot.

19:45 IST: Kieron Pollard adjudged the Man of the Match award.

19:31 IST: It was the partnership between Pollard and Krunal which held the fort against RCB.

19:29 IST: With Pandya brothers out in the middle, it promises to be an exciting finish to a well balanced game.

19:24 IST: Mumbai Indians are nearing their victory as they need just 10 runs from 12 balls.

19:20 IST: Six! Pollard is heading full steam ahead! Smokes Chahal right over his head for a big one!

19:17 IST: Four! Mills misses the ball as the ball rolls away to the fine leg boundary.

19:15 IST: Very smart cricket from Mumbai. The game may go down till the last ball.

19:19 IST: Pollard and Pandya with a partnership of 59 runs from 45 balls have kept Mumbai alive in the contest.

19:03 IST: Four! Mills balls a slow full ball and Pandya sends it to the boundary.

19:03 IST: Mumbai Indians have to keep a check on the required run rate which has slowly crept up to 10.69.

19:02 IST: Mumbai Indians need 63 runs off 36 balls. It is tough but not impossible for Pollard and Krunal Pandya.

19:01 IST: Six! Pollard clears the boundary with ease as he hits Negi inside out.

19:00 IST: Krunal charges Negi, ball goes up high in the air, falls on no mans land.

18:59 IST: Pollard stretches to tap, ball spun away into the keeper's gloves.

18:49 IST: Four! Binny bowls Pollard on the pads and Pollard guides it to the boundary line.

18:44 IST: Four! Mills balls a full delivery and Pollard edges it between the wicket keeper and first slip.

18:42 IST: Six! Krunal Pandya slams Chahal for a big one on the last ball of ninth over.

18:33 IST: The required run-rate is over 9 as Mumbai Indians enter the last 10 overs of the match.

18:32 IST: Krunal Pandya walks out in the middle to join Pollard. Will be a mammoth task for the batsmen to salvage the match.

18:30 IST: What a display by the West Indies spin bowler. Goes back with four wickets and nine runs from four overs.

18:21 IST: After the end of the powerplay, Mumbai Indians stand at 21 for four. Badree shines with a hat-trick!

18:15 IST: Four! The first boundary for MI in the innings. Rana guides the ball to the fine leg boundary.

18:12 IST: Now it all depends upon Pollard and young gun Nitish Rana to get Mumbai out of the difficult situation.

18:02 IST: WICKET!! And another one goes as McClenaghan is sent packing.

17:57 IST: WICKET!! Buttler is dismissed by Binny. It's a soft dismissal for the Englishman, lobbing a simple catch to Gayle. First blood for RCB and they will be pumped now.

17:56 IST: Ball not coming on to the bat. Parthiv and Buttler are finding the going hard.

17:49 IST: Samuel Badree to start off the proceedings for RCB.

17:47 IST: Welcome back for the second innings. Mumbai need 143 to win and will be backing themselves to easily overhaul the target.

17:34 IST: Beautiful bowling display from Mumbai as the visitors kept on taking wickets in quick succession.

17:29 IST: Runs for RCB! Negi steals one run as Parthiv tries to do a Dhoni and misses the stumps.

17:22 IST: Out! Negi swings the bat hard, one drop into Bumrah's hand as he turns and hits the stumps directly at non-striker's end to send Jadhav back.

17:15 IST: Out! Rohit Sharma dives to his left to send de Villiers back to pavilion. Big wicket for MI.

17:14 IST: Crucial 17th over for both teams as Krunal Pandya comes into the attack.

17:11 IST: Kedhar Jadhav joins de Villiers out in the middle.

17:03 IST: Miss! Parthiv misses the outside edge as Virat swings the bat hard.

17:02 IST: Kohli is lighting up the stadium as the audience cheers loudly for the home team.

17:00 IST: Six! de Villiers smashes Bumrah over the boundary line as he starts his attacks on the bowlers.

16:55 IST: Catch miss! de Villiers gets another life as Buttler drops him at the boundary line.

16:47 IST: Will be interesting to see how Kohli and de Villiers treat the Pandya brothers.

16:47 IST: Rohit Sharma brings on Krunal Pandya into the attack.

16:43 IST: Out! Hardik Pandya introduced into the attack and sends back Gayle for 22.

16:38 IST: Completing his spell, Bhajji gives away 23 runs from his four overs.

16:30 IST: Six! Gayle steps down the wicket and slams Harbhajan straight over his head.

16:18 IST: Loud appeal from McClenaghan as umpire turns down the appeal.

16:16 IST: McClenaghan bowls at Kohli's pads and he punches it away beautifully for deep mid-wicket for two runs.

16:09 IST: Six! Announcing his arrival, Kohli hits Southee over his head for a long boundary.

16:07 IST: Charging Harbhajan, Kohli smashes the ball towards long on.

16:06 IST: Harbhajan Singh comes in the attack from pavilion end.

16:05 IST: Close shave for Gayle as ball swings past his outside edge to MI keeper Parthiv Patel.

16:04 IST: Wide again from Southee! This time to Gayle on the leg side.

16:02 IST: Kohli on strike and Southee bowls a huge wide down the leg side.

16:00 IST: Virat Kohli and Chris Gayle to start the proceedings for RCB against MI.

15:59 IST: Both teams make out way in the middle. Chinnaswamy stadium lightens up as they see their skipper Kohli back on the field.

15:51 IST: Shane Watson who had captained the RCB side in absence of Kohli has been dropped.

15:44 IST: A pumped up Royal Challengers Bangalore warming up before taking on Mumbai Indians at M Chinnaswamy Stadium, Bengaluru.

15:42 IST: For RCB Chris Gayle comes back in the squad, for MI Tim Southee comes in for Lasith Malinga.

15:37 IST: It will be interesting to see Royal Challengers Bangalore bounce back into their rhythm as Kohli comes back in the playing eleven.

15:36 IST: RCB skipper warming up before the crucial match against Mumbai Indians at Bengaluru.

15:32 IST: Rohit Sharma has won the toss and elected to bowl.

15:28 IST: Hello and weclome to the live blog of the match between RCB and MI. Huge news for the Bengaluru fans is that captain and leader Virat Kohli finally returns.

Kohli had to undergo rehabilitation after sustaining an injury to his right shoulder while fielding during the 3rd Test against Australia in Ranchi and he has been missing in action ever since.

However, the Delhi batsman has been declared fit on Thursday by the BCCI Medical Team.

Kohli, who had dropped hints of making a return after posting a video on his Instagram account of his gym session on April 11, did some fielding drills during the team's net session on Wednesday.

Last year, Kohli had scored a staggering 973 runs in 16 matches with four centuries to guide RCB to the finals against Sunrisers Hyderabad (SRH) and he would look to improve Bangalore's current sixth place standing on the points table.