Mumbai Indians are back where it all started - against Rising Pune Supergiant. 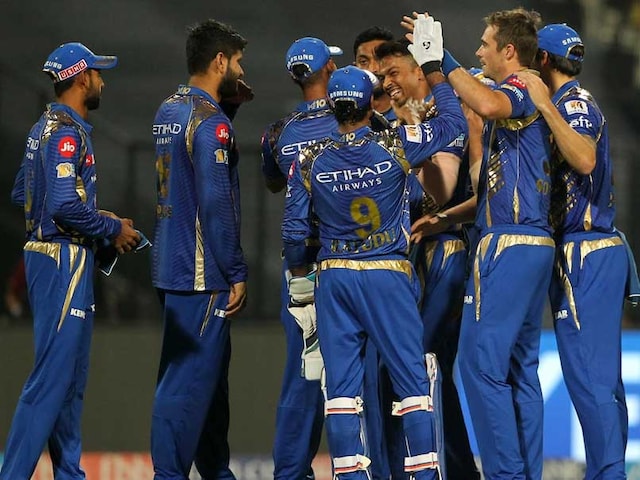 Mumbai Indians are aiming to win the IPL for a record third time.© BCCI

When Mumbai Indians (MI) began their campaign in the Indian Premier League (IPL) Season 10, they would have had some self-doubts. They did not have a great start, losing to Rising Pune Supergiant (RPS) in their first match. Now the wheel has turned a full circle, and they will finish their campaign against the same side. Only that this time MI would be hoping that third time is lucky against Pune.

RPS have beaten them twice in IPL 10 already, and MI would be desperate to return the favour, and pick up the trophy while they are at it.

Here are the key matches in MI's road to the final:

April 24, RPS 160/6 beat MI 157/8 by 3 runs: MI had a streak of 6 consecutive wins before they ran into RPS again and lost again. They lost three wickets in the 20th over to lose improbably from what looked like a winning position.

April 29, MI 153 tied with Gujarat Lions 153/9 (MI won via Super Over): Jasprit held his nerve after a wayward start to ensure that MI grabbed two points in the only Super Over of IPL 10. MI had to thank Parthiv Patel 70 as opener to even get into the Super Over.

May 16, Qualifier 1, RPS 162/4 beat MI 142/9 by 20 runs: MI fell short against RPS again, as Mahendra Singh Dhoni's classic 40 not out off 26 balls gave the Pune side enough runs to hold off their fancied neighbours for the third time.

Comments
Topics mentioned in this article
Mumbai Indians Rohit Sharma IPL 2017 Cricket
Get the latest Cricket news, check out the India cricket schedule, Cricket live score . Like us on Facebook or follow us on Twitter for more sports updates. You can also download the NDTV Cricket app for Android or iOS.