All about Indian Premier League

The sheer big money of the IPL is unprecedented at this level of cricket. It's an entire cricket economy out there. The IPL is predicted to bring the BCCI income of approximately US$1 billion, over a period of five to ten years. All of these revenues are directed to a central pool, 40 per cent of which will go to the IPL itself, 54 per cent to the franchisees and 6 per cent as prize money. 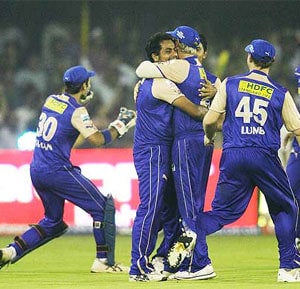 The Indian Premier League, created by the Board of Control for Cricket in India (BCCI) and sanctioned by the International Cricket Council (ICC), is a Twenty20 cricket competition. It is the brainchild of former BCCI vice-president Lalit Modi and is modelled along the lines of club football in Europe, which is unlike anything cricket has known in the past. The best players from around the world will not play according to their nationality but as per the market forces.

The second edition of the cash-rich event was conducted in South Africa and was won by Deccan Chargers.

The third edition returned to India and Chennai Super Kings led by MS Dhoni won the title. Dhoni, who came into the fourth season riding high on a World Cup win, successfully defended the title in 2011.

In the fifth season though, Kolkata Knight Riders, ably led by Gautam Gambhir, lifted the coveted trophy by defeating the defending champs in the final.

The IPL has shifted the viewership pattern of cricket as share of women, kids and younger audience increased over other formats.

In Pakistan the reception was said to be massive, suggesting that it attracted even non-regular cricket followers. With the right mix of cricket and glamour, the high-octane drama, at one stage, seemed to be threatening Bollywood's popularity across the border. But since the Pakistani players have not been a part of the tournament for the last three years, the interest has certainly dipped.

However, in Sri Lanka it received positive reactions. Bangladesh has also reacted positively and with more players being drawn in the loop, the popularity will only grow.

South Africa saw a moderate viewership in the first edition but after hosting the second edition, there was increase in the viewership.

In the West Indies, the IPL became immensely popular. It even threatened to overtake Test cricket completely among certain sections of fans. However, the event was less popular in Australia and in New Zealand it consistently won its free-to-air timeslot.

IPL is a perfect example of an ideal business model

The IPL has emerged as an ideal business model for the sporting fraternity across the world, according to an Australian researcher.

"IPL has been an inspiring business model across the sporting world. It has been a catalyst for growth of commercialisation of sports in India," Pamm Kellet, Associate Professor in Sports Management, Deakin University, Melbourne said on Thursday.

Kellet said India has a lot of untapped potential in sports management and insisted that in order to explore the latent talent, "sophisticated knowledge was required given that needs of different people are different."

"There is a need to strategise, learn from the IPL, and apply it to other sports," she added.

What makes it so lucrative?

The sheer big money of the IPL is unprecedented at this level of cricket. It's an entire cricket economy out there. The IPL is predicted to bring the BCCI income of approximately US$1 billion, over a period of five to ten years. All of these revenues are directed to a central pool, 40 per cent of which will go to the IPL itself, 54 per cent to the franchisees and 6 per cent as prize money. The money will be distributed in these proportions until 2017, after which the share of IPL will be 50 per cent, franchisees 45 per cent and prize money 5 per cent.

In 2011, two new teams - Sahara Pune Warriors and Kochi Tuskera Kerala - had joined the tournament, taking the initial number of teams from eight to ten. However, Kochi failed to abide by the contract and was consequently expelled from the tournament. So this year, just like 2012, there will be nine teams.

The squad sizes for each team have been increased from 30 to 33, with eleven foreign players per squad, up one from the previous limit of 10. However, the number of foreign players that can be part of the final XI will remain at four. The teams will have an additional salary cap of $2 million.

In December 2012, Sunrisers Hyderabad replaced the bankrupt Deccan Chargers as the franchise from the South Indian state. Thus, the number of teams remain the same as 2012 but Deccan has been replaced by Sunrisers as the Hyderabad franchise.

Defending champions Kolkata Knight Riders will take on Delhi Daredevils in the inaugural match of the sixth edition at the Eden Gardens stadium in Kolkata on April 3.

The tournament is scheduled to feature nine franchisee teams and a total of 76 matches will be played across the 12 venues in the run to the finals on May 26.

The league stage of the 54-day-long event will comprise of 72 matches with each team playing the other eight in a home-and-away format.

The play offs would be hosted by Kolkata and Chennai, the two finalists from the previous edition.

While Chennai will host Qualifier 1 -- the table toppers from the league stage versus the second team on that list (1 vs 2) -- and the Eliminator -- the contest between the third and fourth placed teams (3 vs 4) -- on May 21 and 22 respectively, Kolkata will be the venue for Qualifier 2 to be played on May 24.

The city will also host the final on May 26.

In the Indian Premier League, an Icon Player was a player who could only play for his home city in the competition. Unlike all the other players involved, the icon players did not go through bidding. The rules changed for the 2011 format when each of the franchises were given the option of either letting go of their icon players or retaining them for a price, apart from the other three players of their choice. So while the likes of MS Dhoni and Sachin Tendulkar were retained, others like Sourav Ganguly and Yuvraj Singh were released back into the pool of players.

Following are some important facts on the nine franchises of the Indian Premier League (IPL) Twenty20.

BANGALORE (titled Royal Challengers) Situated in southern India and is the country's IT capital. Owned by United Breweries Ltd.

Taking a cue from other famous events like the Tour de France, the Indian Premier League had announced the introduction of the Orange Cap, which would be worn by the batsman with the most cumulative runs to his name on each day of the event.

The holder of the Orange Cap at the end of the Twenty20 extravaganza will be honoured with the Winner of Orange Cap 2008 on the day of grand finale.
The leader of the multi-stage gruelling cycle race Tour de France wears the yellow jacket at the start of each new stage to help identify the overall leader easily.

Purple Cap: This is awarded to the bowler with most cumulative wickets to his name. The holder of the Purple Cap receives recognition on the final day of the IPL. In the event of a tie at any given time, the holder will be determined by superior economy rate.

Who have got the title sponsorship rights?

Indian real estate developer DLF Universal secured exclusive rights to the Indian Premier League title sponsorship worth INR 200 crore (over US$50 million) for five years. The deal ended with the 2012 edition. From 2013, Pepsi co. limited are the title sponsors of the mega event.

Who are the franchise owners and what's the money involved?