Five wickets in the last 10 balls of the Kolkata Knight Riders' innings choked them to lose their thrilling clash against the Delhi Daredevils, who moved to second place in the Indian Premier League standings with four wins in six matches. Chasing a formidable target of 187, the Knights were bowled out in 18.3 overs. Catch highlights of Delhi Daredevils vs Kolkata Knight Riders here.

At 151/5, Kolkata Knight Riders looked like they would cruise to victory but some smart cricket and overall team performance from Zaheer Khan's Delhi Daredevils helped them to win their fourth match in six outings. Robin Uthappa's solid innings of 72 went in vain for KKR. Get highlights of Delhi Daredevils vs Kolkata Knight Riders here. (SCORECARD | STREAMING | POINTS TABLE | FIXTURES | NEWS | PLAY FANTASY LEAGUE)

19:47 hrs IST: And that is it from us in New Delhi. One last info to end the it. Daredevils player Carlos Brathwaite has been named Man of the Match for his all-round performance. 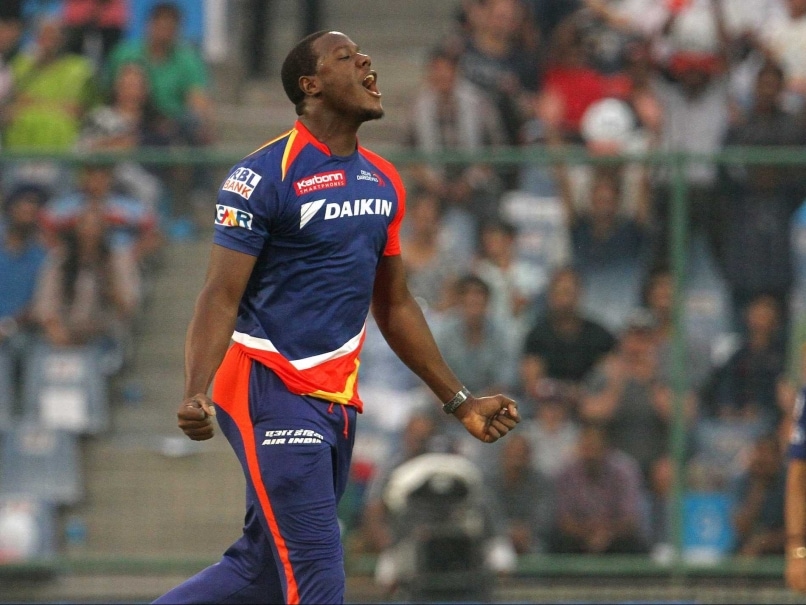 Delhi Daredevils player Carlos Brathwaite was named the man of the match for picking three wickets and also scoring a cameo of 34 off 11 balls.

19:46 hrs IST: Also join us for the second match of the day between Sunrisers Hyderabad vs Royal Challengers Bangalore in Hyderabad.

19:41 hrs IST: But could the Daredevils have clinched the win without this catch?

Wicket! @Tipo_Morris runs Jason Holder out on a duck. Superb work by our #DilliBoys. Keep it going lads! #DilDilli #DDvKKR

19:19 hrs IST: OUT!!! After being hit for 15 runs Amit Mishra takes a stunner off his own bowling to dismiss Andre Russell for 17.

19:14 hrs IST: Have a look at Shreyas Iyer taking a stunning catch to dismiss Suryakumar Yadav.

19:04 hrs IST:Meanwhile Robin Uthappa brings up his 16th IPL FIFTY.Hits a SIXÂover long-off to bring up the landmark!

19:01 hrs IST: This is becoming increasingly difficult for KKR. But as long as Uthappa is there, KKR have a chance.

18:54 hrs IST: OUT!!!Ambitious from Suryakumar Yadav but is caught with a stunning catch coming from Shreyas Iyer. Yadav goes back for 21.

Bottom of the bat, not enough power and a stellar catch sends @surya_14kumar walking back to the dugout. #KKR 94/4 #DDvsKKR #AmiKKR

18:32 hrs IST: OUT!!!Just when it was looking like KKR would rebuild Yusuf Pathan throws away his wicket. Mis-timing a pull which went straight to short fine leg to be caught for 10!

18:25 hrs IST:Oooh! That was a bad slip from Chris Morris! Right at the crease while bowling. That must have hurt! 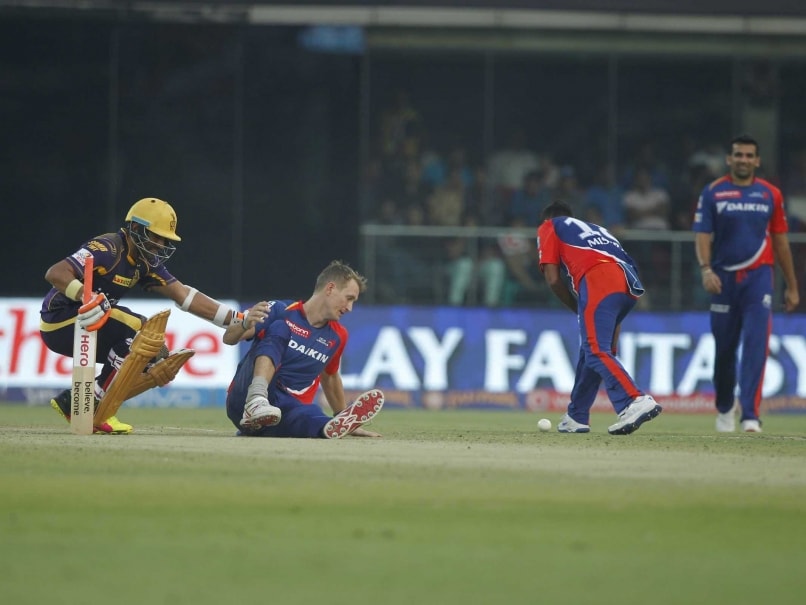 Chris Morris had a bad fall while bowling against Kolkata Knight Riders.

Oh that was a nasty spill for Morris. Hope he's ok! #DDvsKKR #AmiKKR

Piyush Chawla comes in to bat at no 3. Interesting decision by #KKR. #DilDilli #DDvKKR 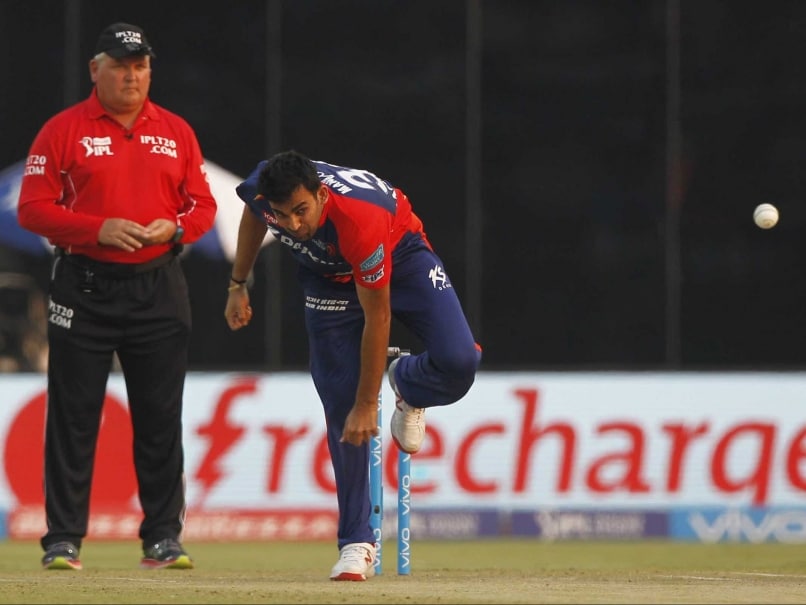 18:02 hrs IST:Can KKR chase it down? Gambhir and Uthappa have got a good start.

17:50 hrs IST: Here come out KKR skipper Gautam Gambhir and Robin Uthappa. Both have been in good form this season.

17:39 hrs IST: EventuallyDelhi Daredevils finish at a good score of 186/8 against Kolkata Knight Riders. This is the home team's highest total against KKR in all of IPL!

17:38 hrs IST: Wickets, boundaries and sixes at regular intervals. The momentum kept changing all the time.

17:36 hrs IST: End of the innings and what a finish it was! Exciting to the core. 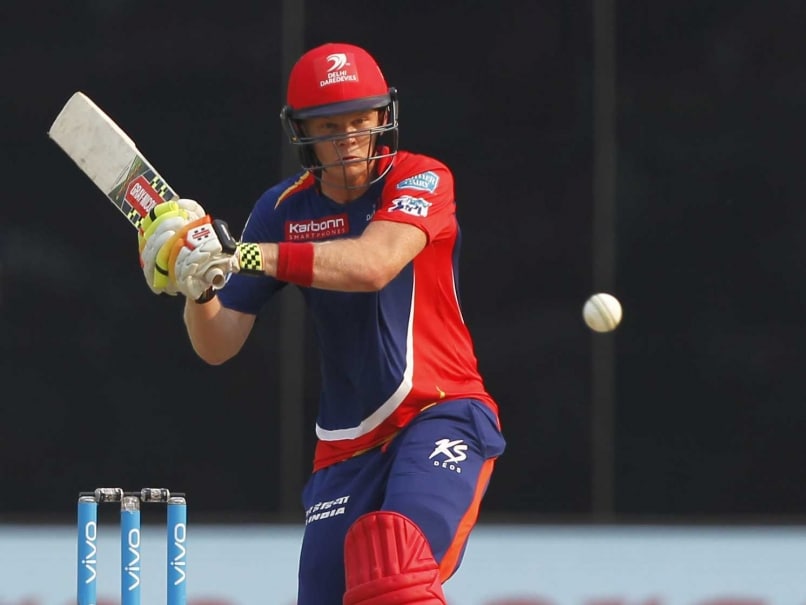 Sam Billings became the first batsmen since 2012 to score a half-century in his IPL debut.

17:24 hrs IST: It is raining sixes and boundaries right now! World T20 final hero Carlos Brathwaite at the crease. What else can we expect?

17:23 hrs IST: Billings is the first batsmen since Richard Levy in 2012 to score an IPL half-century on debut!

17:14 hrs IST: That was the end of the 105 run fourth wicket brilliant partnership between Nair and Billings.

16:55 hrs IST: Sam Billings, who is making his debut in IPL, is making his chance count! Helping the Daredevils rebuild their innings.

16:49 hrs IST: With onlyone win in six matches, the Mohali-based team have not been doing that well in this edition of the Indian Premier League.

16:45 hrs IST: Meanwhile there has been some development in the Kings XI Punjab camp where Murali Vijay has been appointed the new captain replacing David Miller. The South African, however, was still remain a part of the squad.Â 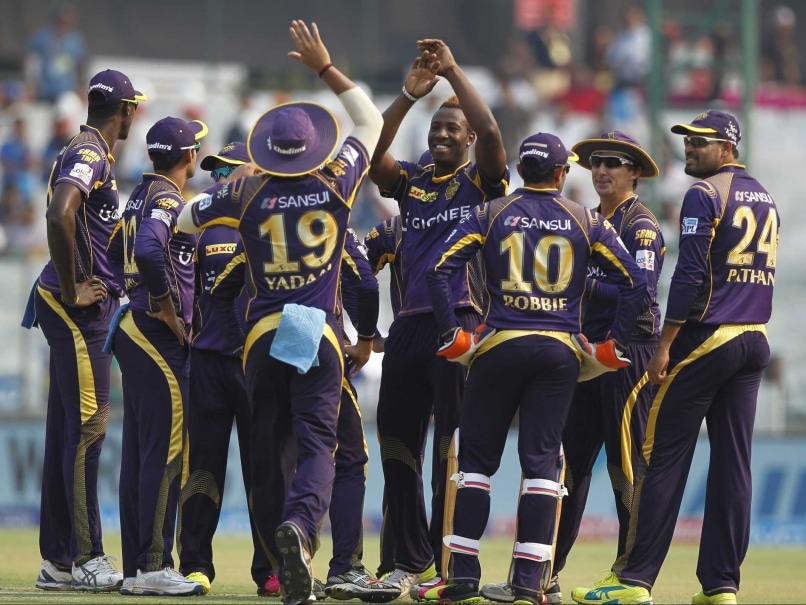 Andre Russell gave Kolkata Knight Riders the start they needed by clinching two wickets in the first over against Delhi Daredevils.

16:25 hrs IST: DD will need a monumental effort to climb out of this deep grave they have created for themselves.

16:18 hrs IST:Â Nair and Samson rebuilding the innings after the dreadful start. DD 30/2 after four overs.

Done with the first over, #DD on 2-2. @karun126 joins @Im_SanjuSamson at the crease. Lets have a good partnership now! #DilDilli #DDvKKR

16:10 hrs IST: No wonder KKR have struck so early. That is Wasim Akram giving the bowlers some tips.

16:07 hrs IST: Something special about this wicket? Two wickets in the first over!

16:05 hrs IST: Andre Russell has given the perfect start that KKR needed! DD 2/2 after the first over.

15:55 hrs IST:Â The players have stepped out on the field.

15:51 hrs IST: DD have won three games out of five while KKR have clinched four out of six!Â

KKR have won 10 of the 16 matches they've played against DD in IPL. Do you think they'll win their 11th game today? pic.twitter.com/Im1GDyv044

KKR have lost the least number of wickets in the powerplay overs this year. They have lost only 3 wickets. #KKRStats #AmiKKR

15:15 hrs IST:Hope he takes his team to victory today!Â

Here's wishing @Tipo_Morris a very Happy Birthday! Hope you have a great day and a cracker of a game! pic.twitter.com/F2awPXAoka 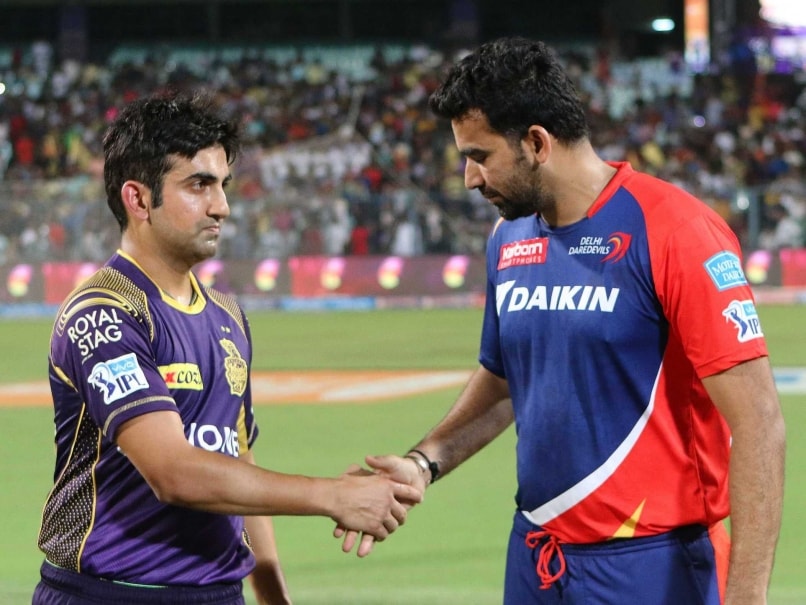 Â
Both Delhi Daredevils and Kolkata Knight Riders are coming off defeats. While DD suffered a heartbreak against Gujarat Lions, KKR lost to defending champions Mumbai Indians. Interestingly, both Kolkata defeats this season have come against MI.
Â
Saturday's game could be a contest between spinners on either side. If DD have an Amit Mishra and Imran Tahir, KKR have a Sunil Narine and Piyush Chawla. For DD, it will be a grudge game for sure.
Â
Delhi Daredevils had ran into a rampaging Kolkata Knight Riders in their first-round clash this season. At Eden Gardens on April 10, the second day of IPL 2016, Delhi were all out for a paltry 98 and lost by nine wickets.
Â
Since that defeat, DD have a long way. They have had a hattrick of wins almost pulled it off against table toppers Gujarat Lions in their last match on Wednesday.
Â
DD' South African recruits have been the team's pillars. Chris Morris' heroic knock against Gujarat went in vain while JP Duminy, Quinton de Kock and Imran Tahir have proved to be real assets.
Â
KKR have been consistent and that's largely because skipper Gautam Gambhir has been in good form. If they can sort of their middle-order frailties, KKR will become more dangerous as a side.

Comments
Topics mentioned in this article
Live Cricket Score Live Blogs IPL 2013 Kolkata Knight Riders Delhi Daredevils Zaheer Khan Gautam Gambhir Cricket IPL 9
Get the latest updates on IPL Auction 2023 and check out  IPL 2023 and Live Cricket Score. Like us on Facebook or follow us on Twitter for more sports updates. You can also download the NDTV Cricket app for Android or iOS.