Sunrisers Hyderabad need just one more win to qualify for the Indian Premier League play-offs, as five other teams battle it out for the three other spots 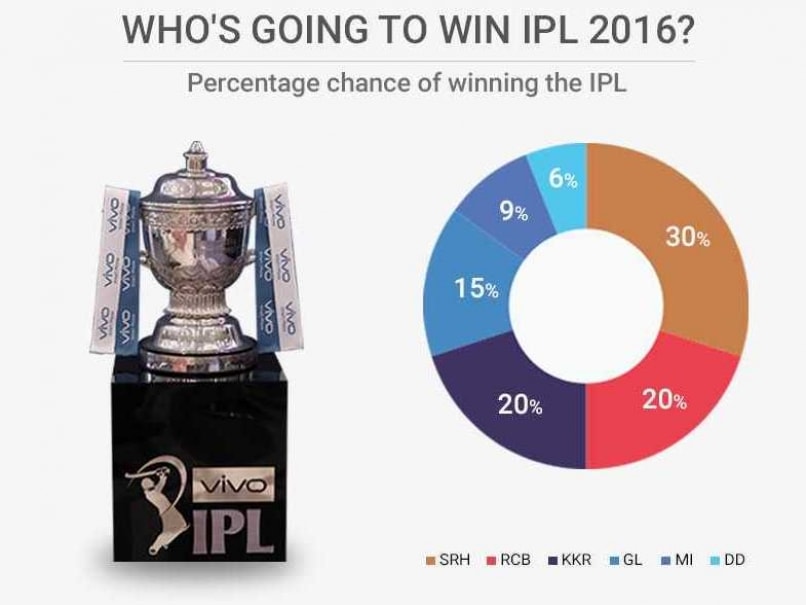 Sunrisers Hyderabad are the hot favourites to qualify for the play-offs of 2016 Indian Premier League.© BCCI

The 2016 Indian Premier League is 50 matches old. With the league stages coming to an end, the race for the four play-off spots is spicing up.

Six teams, Sunrisers Hyderabad, Kolkata Knight Riders, Mumbai Indians, Gujarat Lions, Delhi Daredevils and Royal Challengers Bangalore are in the fray. Here are the scenarios for each team in order to seal their place in the play-offs.

Sunrisers Hyderabad are all but through to the play-offs. A win against Delhi Daredevils will see them progress (officially). In case they lose both their remaining matches, they'll have to ensure that they do not lose them by a big margin. Currently, the Sunrisers have a Net Run-Rate of +0.400.

Next match: Delhi Daredevils (May 22, Raipur)

RCB are on a role after winning their last three games comprehensively against Gujarat Lions, KKR and KXIP respectively. Virat Kohli's team now need to win their last match against Delhi Daredevils. Even if they lose their last match, they can still go through with 14 points, but will need other results to work in their favour. They have a brilliant run-rate of +0.930.

Next match: Gujarat Lions (May 21, Kanpur)

Mumbai Indians have to win their last game against Gujarat Lions. A loss would mean that the play-off situation is out of their hands. They will have to hope Delhi Daredevils and Kolkata Knight Riders lose their remaining games.

Suresh Raina's team are indeed in trouble as they have the worst net run-rate (-0.75) among all the teams. They'll have to ensure that they win by big margin if they have to improve their NRR. A loss in any of their last two games could see them staring at the exit.

Next matches: Sunrisers Hyderabad (May 20), Royal Challengers Bangalore (May 22)

The loss against RPS would have definitely hurt Delhi Daredevils a lot and it has brought them to a stage where they have to win their remaining two games to qualify for the play-offs. There is a chance that their final game against Royal Challengers Bangalore in Raipur could be a potential knock-out, if they defeat SRH on Friday. They must also hope that Mumbai Indians lose their last game against Gujarat Lions. If GL win, then they must hope that KKR lose both their games.

Comments
Topics mentioned in this article
IPL 2013 Sunrisers Hyderabad Kolkata Knight Riders Mumbai Indians Delhi Daredevils Cricket IPL 9
Get the latest updates on IPL Auction 2023 and check out  IPL 2023 and Live Cricket Score. Like us on Facebook or follow us on Twitter for more sports updates. You can also download the NDTV Cricket app for Android or iOS.