India vs West Indies: A sparkling display of power hitting by Suryakumar Yadav and Venkatesh Iyer in the death overs blew the West Indies away in the 3rd T20I in Kolkata. 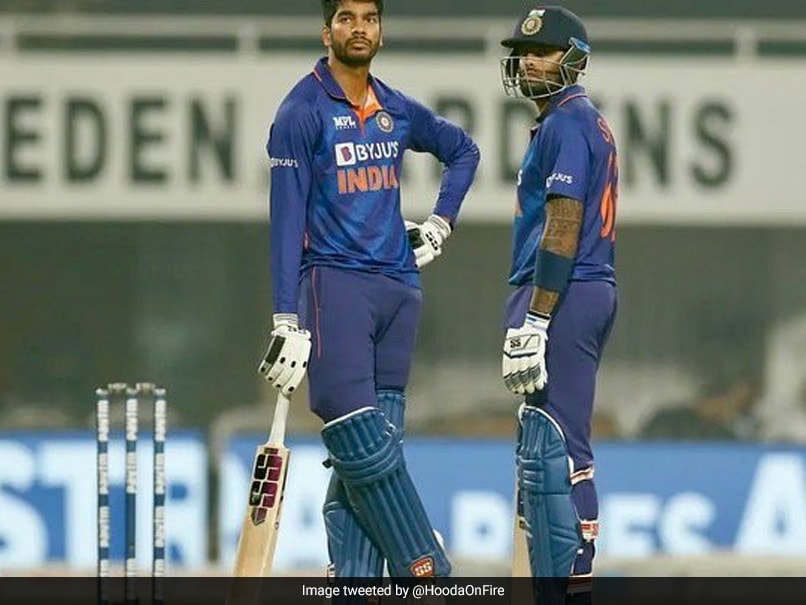 Ind vs WI: Venkatesh Iyer and Suryakumar Yadav scored heavily in the last five over of India's innings.© Twitter

Under the leadership of Rohit Sharma, India whitewashed the visiting West Indies side 3-0 in the T20I series. After securing two fabulous victories, the Indian team won the final match at the Eden Gardens by 17 runs. Asked to bat first, a relatively young India side displayed great composure and maturity under trying circumstances against a spirited touring bowling attack. Despite losing Ruturaj Gaikwad early, India strung together crucial partnerships as they posted 184/5 in 20 overs. In the course of this effort, Team India also achieved a new high for themselves in T20Is, thanks to a brilliant batting effort from Suryakumar Yadav and Venkatesh Iyer in the death overs.

After 15 overs, India were placed at 98/4 with Suryakumar and Iyer at the crease. However, both batters went berserk as they smashed 86 runs off the final 30 balls to post the most runs by an Indian side in the last five overs of a T20 international.

India went past their previous best of 80 runs which they achieved against England in the last five overs of their innings at the inaugural T20 World Cup in Durban in 2007.

Apart from the top two, the list includes India scoring 77, 75 and 74 as their most runs in the last five overs of a T20I game.

The herculean effort from the duo gave a perfect cushion for the bowlers to fall back upon as they defended the target with ease.

Harshal Patel starred with the ball with three wickets while Deepak Chahar, Venkatesh Iyer and Shardul Thakur pitched in with two wickets each to help India win the game and register a 3-0 series clean sweep.

Rohit Sharma India vs West Indies 2022 Cricket
Get the latest updates on Fifa Worldcup 2022 and check out  Fifa World Cup Schedule, Stats and Live Cricket Score. Like us on Facebook or follow us on Twitter for more sports updates. You can also download the NDTV Cricket app for Android or iOS.