Both Suryakumar and Pollard have been teammates in the Indian Premier League (IPL) for several years now, even before Suryakumar made his international debut. 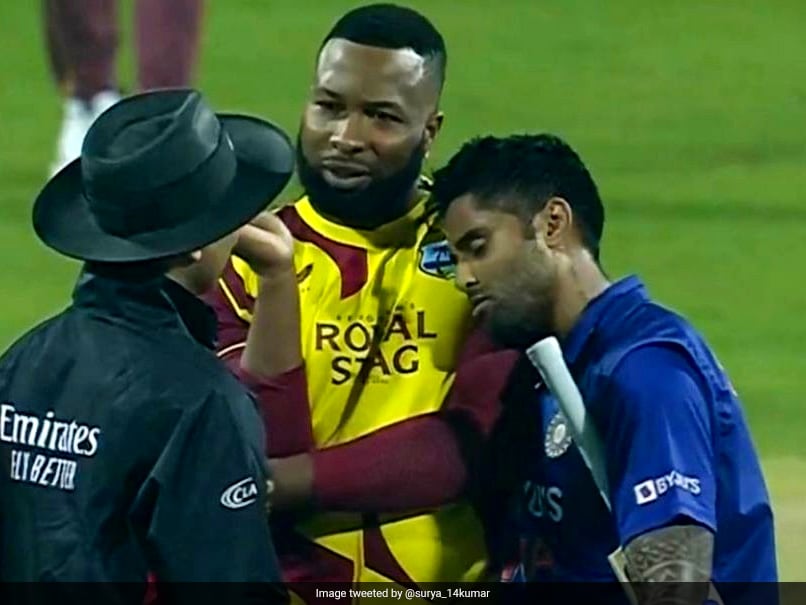 Suryakumar Yadav had a T20I series to remember against West Indies as he played a couple of fantastic innings to help Rohit Sharma's Team India complete a 3-0 sweep against Kieron Pollard's team. The Mumbai Indians batter was adjudged "player of the match" in the 3rd T20I and he also took home the "player of the series" award. A day after the win, Suryakumar took to Twitter to post photos of himself with Pollard.

The post, which had two photos of Suryakumar hugging Pollard, was captioned, "& the brotherhood continues".

Both Suryakumar and Pollard have been teammates in the Indian Premier League (IPL) for several years now, even before Suryakumar made his international debut. The two players share a great bond and will continue to play with each other after Mumbai Indians decided to retain both players ahead of the IPL mega auction.

The photo shared by the Indian middle-order batter just goes to show the bond that modern day cricketers share, despite representing their national teams against each other.

India beat West Indies 3-0 in both the ODIs and T20Is to make a strong statement.

India's next campaign is yet another home series, which will be played against Sri Lanka. The two teams will face each other in T20Is and Tests.

Mumbai Indians Social Cricket
Get the latest updates on ICC T20 Worldcup 2022 and CWG 2022 check out the Schedule, Live Score and Medals Tally. Like us on Facebook or follow us on Twitter for more sports updates. You can also download the NDTV Cricket app for Android or iOS.