India beat West Indies by an innings and 272 runs to go 1-0 up in the two-match Test series. 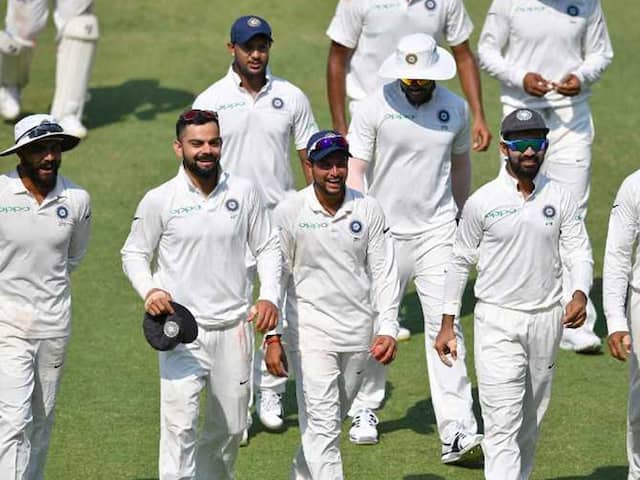 Virat Kohli was happy with India's bowling performance against the West Indies in the first Test.© AFP

India beat the Windies by an innings and 272 runs inside three days of the first Test at the Saurashtra Cricket Association Stadium in Rajkot to go 1-0 up in the two-match series on Saturday. After posting a mammoth 649/9 in their first innings, India bowled out the tourists twice on the third day of the opening Test to register their biggest-ever Test win. India enforced the follow-on after bowling out the Windies for 181 in the first innings. The Windies looked in poor form as they were yet again bowled out for 196 in their second innings in the final session of the third day. Ecstatic with the team's performance, captain Virat Kohli said that he is happy with the team's clinical performance.

However, Kohli mentioned that they still have room for improvements.

"We want to improve upon the things we need to do, not focus on what the opposition want to do," the right-handed captain said.

Kohli lavished praise on youngster Prithvi Shaw, adjudged man of the match, for his brilliant century on Test debut.

"Especially delighted for Prithvi and Jaddu (Ravindra Jadeja). The way Prithvi dominated on debut was outstanding to see. Easy conditions or not, you still have to go out there and back yourself to dominate. The guy showed he's a different quality, which is why he's pushed into the Indian team so quickly. He just grabs his opportunity with both hands. Exciting to see from a captain's point of view," Kohli remarked.

The Indian bowlers did a fantastic job with the ball and Kohli had nothing but praise for them.

"If you see the first innings, the way Mohammed Shami and Umesh Yadav ran in, it was pretty good. Spinners are clinical in these conditions anyway. Kuldeep Yadav was outstanding in the second innings, Ravichandran Ashwin in the first. Over rates had to do a bit with the umpires who were pushing us, not allowing us to drink water. Spinners bowl so much in India, we're never going to fall short of the overs anyway," Kohli said.

The second India vs Windies Test will be played at the Rajiv Gandhi International Stadium in Hyderabad, starting October 12.

Ravindra Jadeja Kuldeep Yadav India vs West Indies 2018 India vs West Indies, 1st Test Cricket
Get the latest Cricket news, check out the India cricket schedule, Cricket live score . Like us on Facebook or follow us on Twitter for more sports updates. You can also download the NDTV Cricket app for Android or iOS.