Shikhar Dhawan, who made a brilliant 94 in the Nagpur Test, scored 23 off 35 deliveries before being dismissed by Dilruwan Perera. 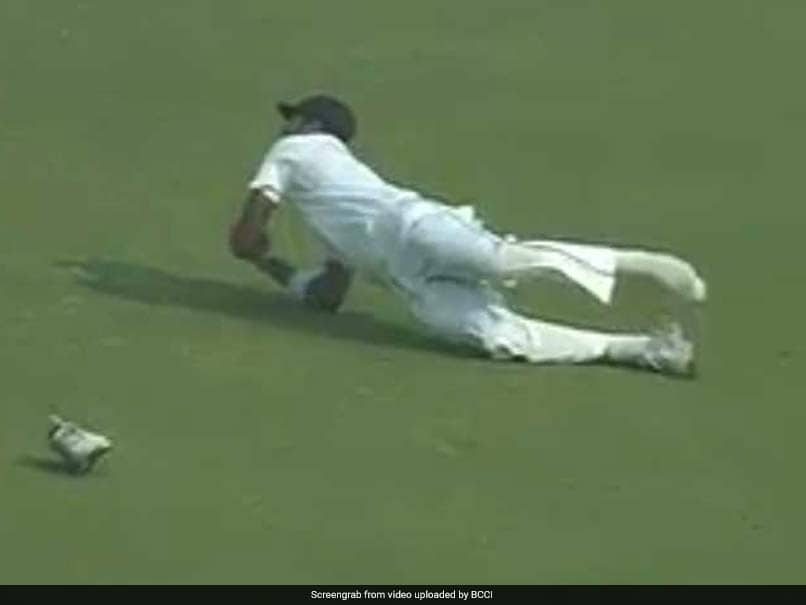 Lakmal lost his balance but in the end managed to take Dhawan's catch.© BCCI

India opener Shikhar Dhawan fell short of just six runs to score his seventh Test century in the second Test against Sri Lanka in Nagpur, which India won by an innings and 239 runs. Starting the innings in thethird and final Test at Feroz Shah Kotla in New Delhi, Dhawan in an ominous mood yet again, but soon gifted his wicket to Dilruwan Perera, who made the left-hander his 100th victim in Tests. Perera, however, has his teammate Suranga Lakmal to thank for assisting him get the landmark wicket.

In hazy conditions, Lakmal, who was fielding at backward square leg, lost his shoe while chasing the ball as he went for the catch. The Sri Lankan lost his balance, but in the end managed to take Dhawan's catch to give Sri Lanka their first success. The incident drew several laughs from the Sri Lankan camp. Dhawan too was stunned with Lakmal's effort and had a smile on his face while going back to the pavilion.

The shoe side story https://t.co/HBg1A5YSMc

Dhawan, who made a brilliant 94 in the Nagpur Test, scored 23 off 35 deliveries before being dismissed by Perera.

The hosts, who lead the three-match series 1-0 after thrashing Sri Lanka in the second Test, made two changes to the team as they prepare for the upcoming tour of South Africa in January.

The visitors made three changes to their starting line-up with debutant batsman Roshen Silva, Dhananjaya de Silva and Lakshan Sandakan making their way into the team.

Comments
Topics mentioned in this article
India Cricket Team Sri Lanka Cricket Team India vs Sri Lanka 2017-18 Shikhar Dhawan Suranga Lakmal Dilruwan Perera Cricket
Get the latest updates on Fifa Worldcup 2022 and check out  Fifa World Cup Schedule, Stats and Live Cricket Score. Like us on Facebook or follow us on Twitter for more sports updates. You can also download the NDTV Cricket app for Android or iOS.