MS Dhoni's batting record as number four player has been excellent - his aggregate being 244 in eleven innings (seven times not out), including a half century - 56 vs England at Bengaluru on February 1, 2017. His strike rate of 134.01 is quite impressive at this batting position. 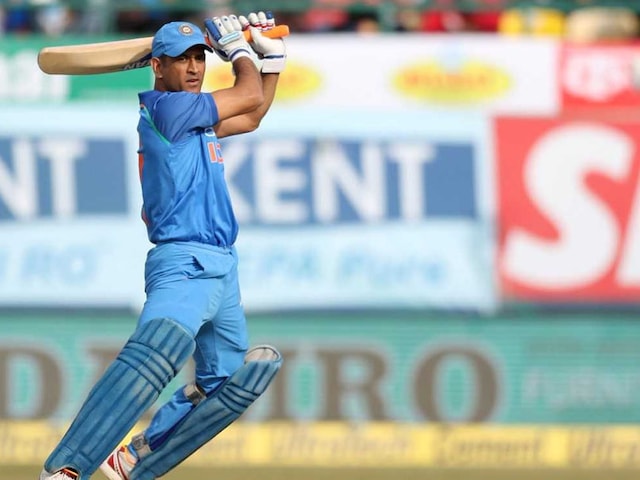 MS Dhoni was in top form in the 1st T20I vs Sri Lanka on Wednesday.© BCCI

Mahendra Singh Dhoni on Wednesday played a key role in India's biggest T20I win till date. The former India captain contributed in every department, helping the hosts register a crushing 93-run win over Sri Lanka in the 1st T20I at Cuttack's Barabati Stadium. Not only did the wicketkeeper-batsman provide a final flourish to India's innings with an unbeaten 39-run knock, he also went on to add four dismissals behind the stumps, taking his tally to 74. Not just that, the 36-year-old notched up three other records during the series opener against Thisara Perera's men.

Dhoni is the first wicketkeeper to effect four dismissals in T20Is involving India and Sri Lanka.

Dhoni (201 dismissals in 272 matches) has become the second wicketkeeper after Kamran Akmal (207 in 211 matches) to complete 200 dismissals or more in T20 cricket.

Captain Rohit Sharma applauded Dhoni, who was promoted up the order, during the post-match presentation."MSD (Dhoni), he's just class. No. 4 really paid off. He's played so many games for us, won so many games for us and moving forward, we feel making him bat at No. 4 is ideal," Rohit said.

Dhoni's batting record as number four player has been excellent - his aggregate being 244 in eleven innings (seven times not out), including a half-century - 56 vs England at Bengaluru on February 1, 2017. His strike rate of 134.01 is quite impressive at this batting position.

"For a long period of time, MS has been finishing games off, but we want him to bat freely now, without that pressure. We were not sure what the ideal score would be, with dew and the wicket playing weirdly. So I thought 180 was a great effort," he added.

Comments
Topics mentioned in this article
India Cricket Team Sri Lanka Cricket Team Barabati Stadium, Cuttack Cricket India vs Sri Lanka 2017-18 MS Dhoni
Get the latest Cricket news, check out the India cricket schedule, Cricket live score . Like us on Facebook or follow us on Twitter for more sports updates. You can also download the NDTV Cricket app for Android or iOS.