India vs South Africa: South Africa's rotten luck with the coin toss continued despite using a proxy captain in Temba Bavuma during the third and final Test in Ranchi. 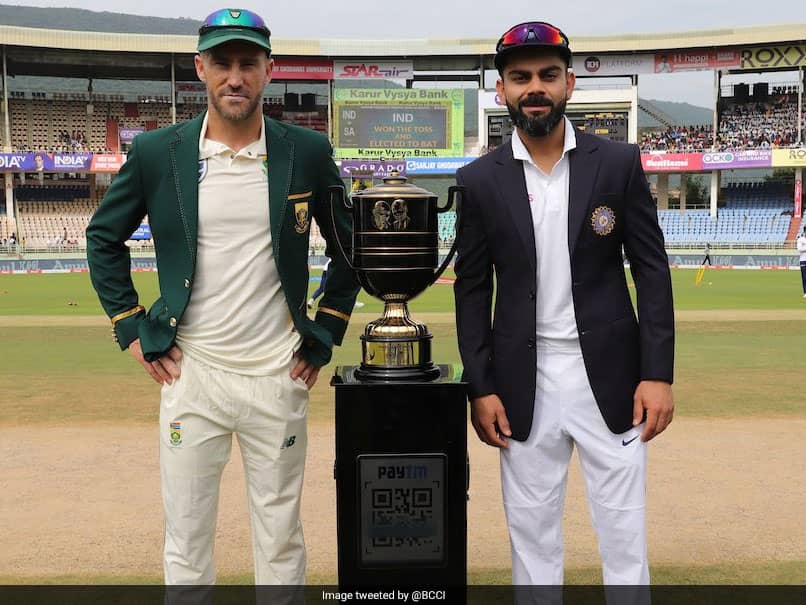 India vs South Africa: Virat Kohli won the toss and elected to bat in the third Test in Ranchi.© BCCI/Twitter

Virat Kohli was in for a surprise as he made his way for the all-important toss in the third Test being played at JSCA International Stadium Complex in Ranchi. Faf du Plessis had revealed before the third and final Test that he may use a proxy, following his rotten luck at the coin toss, which has seen him lose the previous six times the coin has been flipped. However, at the toss, India skipper Virat Kohli just couldn't smiling after being sandwiched by two South Africans -- Proteas captain Faf du Plessis and the proxy captain Temba Bavuma. But as luck would have it, Virat Kohli flipped the coin but Bavuma got it wrong with the Indian captain winning his third straight toss of the Test series.

Virat Kohli called it a no-brainer to bat first at the Toss #TeamIndia #INDvSA @Paytmpic.twitter.com/3V4fKvcVWr

India made one change to their team from the one that completely outclassed the visiting South Africans in Pune. Ishant Sharma was rested with Shahbaz Nadeem making his Test debut for India.

South Africa made as many as five changes to their team. Vernon Philander, Theunis de Bruyn, Aiden Markram, Keshav Maharaj and Senuran Muthusamy all sitting out. Lungi Ngidi, Zubayr Hamza, Heinrich Klaasen, George Linde and Dane Piedt came into the team, hoping to deny a whitewash.

Virat Kohli, speaking at the toss, said that it was a no-brainer to bat first in Ranchi.

"Looks like a good wicket. Will be hard upfront and then got slower. Like the typical Ranchi wicket. It's a no-brainer to bat first on this one. I don't think it's gonna be slow but it will keep lower than Pune maybe. Should spin at a decent pace. As long as it turns with pace on the ball, we don't mind the bounce," India skipper Virat Kohli said.

"It shows that it isn't meant to be (about using Bavuma as a proxy skipper for luck). Important toss as this looks the driest surface of the series. It's about the first innings really and we need to put runs on the board when we bat," was Du Plessis' reaction after losing yet another toss.