Virat Kohli himself had taken a great catch during the 2nd T20 International vs South Africa but David Miller's sensational grab at the boundary to dismiss Shikhar Dhawan left Kohli awestruck. 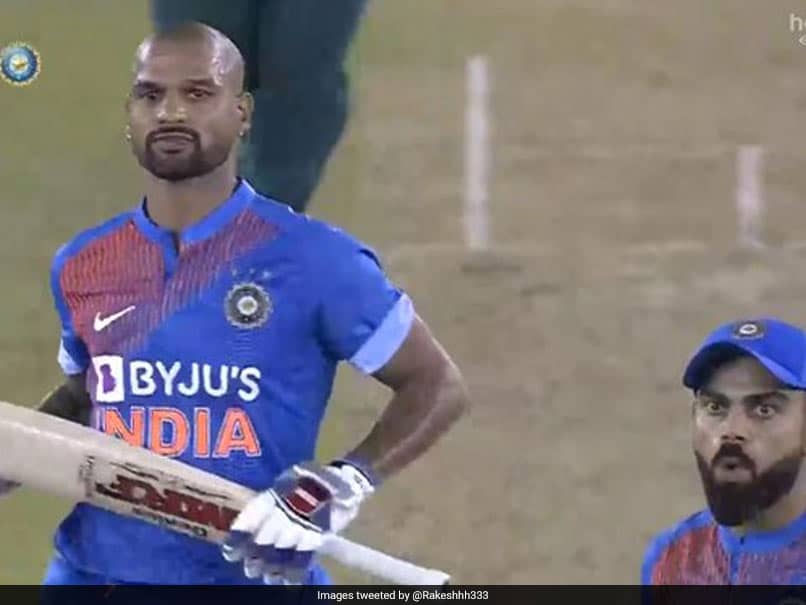 Shikhar Dhawan walked out with a wry smile on his face.© Twitter

Virat Kohli pulled off an impressive backward running catch to help fast bowler Navdeep Saini dismiss South Africa captain Quinton de Kock in the second T20 International in Mohali on Wednesday. However, the storm Virat Kohli's catch created on Twitter soon merged into a hurricane as David Miller took a remarkable one-handed diving catch when India came to chase 150 at the PCA stadium. Before fans could get over David Miller's catch, Virat Kohli caught their attention again and gave a priceless reaction that went viral on Twitter within no time.

That reaction of #kohli tells u how amazing that #Miller catch was.
One of the best in recent times #IndvsSA #INDvSA pic.twitter.com/426SSsSVGR

Kohli and Dhawan's reaction was priceless after that catch

Kohli's reaction says it all. Take a bow Superman! @DavidMillerSA12

After India lost opener Rohit Sharma for 12 in the fourth over, Virat Kohli walked in to join Shikhar Dhawan in the middle. The duo stitched a 61-run partnership before Miller pulled off a catch which looked like a one-bounce boundary for Dhawan.

Dhawan had come down the pitch to hit spinner Tabraiz Shamsi straight down the ground. To spoil his plans, Miller came running from long-on and flung himself to his right to complete the catch tumbling on the ground.

Dhawan walked out with a wry smile on his face and Kohli too looked stunned after watching the catch.

"It was an unbelievable catch and Virat was thinking that as well. I was smiling and appreciated his effort. It was hit hard, it wasn't lofted, it was hit flat and I took it in my stride," Dhawan said in the post-match presentation.

With the seven-wicket win the in the second T20I, India took an unassailable 1-0 lead in the three-match series as the series-opener was washed out in Dharamsala on Sunday.