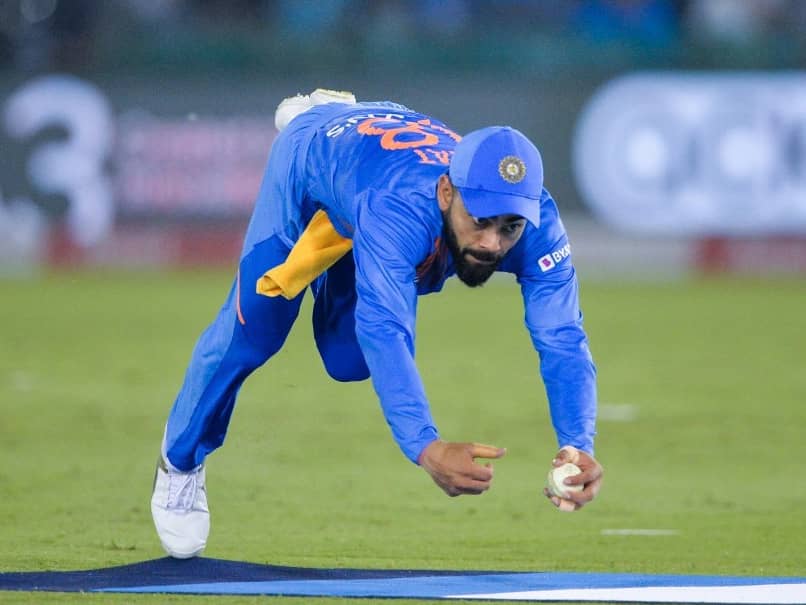 Virat Kohli, stationed at mid-off, covered a lot of ground to complete a stunning catch.© AFP

Virat Kohli, one of the fittest sports persons in the world, displayed insane athleticism when he took a stunning one-handed catch to remove Quinton de Kock during the second Twenty20 International (T20I) against South Africa in Mohali on Wednesday. The South African captain played a pull shot off Navdeep Saini's 141.2 kmph short of length delivery. The ball flew over the bowler's head but Kohli, stationed at mid-off, covered a lot of ground, stretched both his hands and completed a flawless catch with his left hand.

Earlier, skipper Virat Kohli won the toss and elected to bowl in the second T20I against South Africa.

India's bowlers then restricted South Africa to 149/5 despite an attacking half-century from De Kock.

De Kock got the visitors off to a strong start as he put on a crucial 57-run second-wicket stand with debutant Temba Bavuma, who made 49, after being put in to bat first.

The left-handed opener, who was recently appointed leader of the T20 side, smashed eight fours as he completed his third fifty in the shortest format.

Paceman Saini got the prized wicket of de Kock with Kohli taking a sensational one-handed running catch from mid-off.

South Africa lost another wicket five balls later as Ravindra Jadeja sent back Rassie van der Dussen for one with his left-arm spin to check the batting team's charge.

Both teams are looking to go one-up in the three-match series after the first game was washed out without a ball being bowled in Dharamsala on Sunday.