The incident on Saturday was the third case of pitch invasion in the ongoing three-match Test series between India and South Africa. 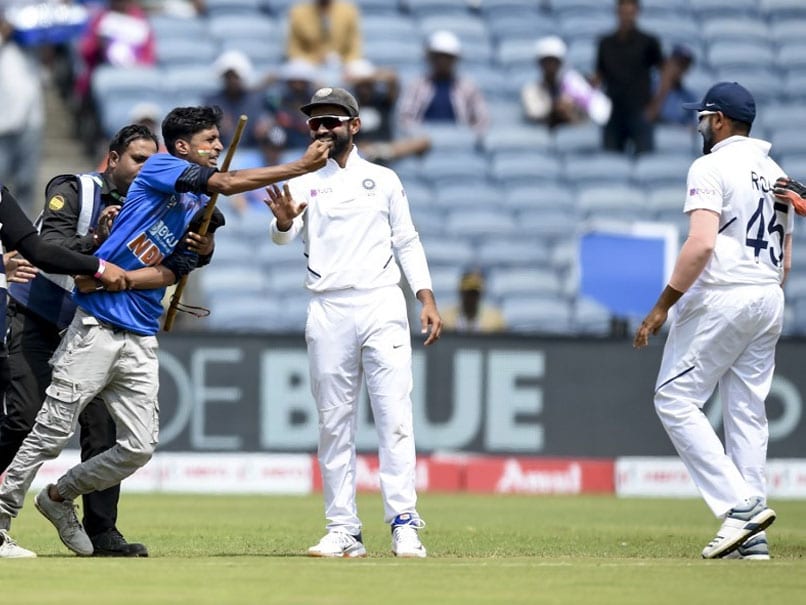 The fan came on to the pitch and touched Rohit Sharma's feet.© AFP

Virat Kohli and Rohit Sharma are arguably the most followed cricketers in the world right now. Fans turn out in huge numbers to watch them play irrespective of the venue. Certainly, the cricketers also enjoy the love and attention they get from the fans as long as everything stays within a limit. However, the incidents of pitch invasion are on a rise in India. The invaders cause embarrassment for the organisers, cricketers and often the viewers too. On Day Three of the second Test between India and South Africa in Pune, a fan breached the security cover at the Maharashtra Cricket Association Stadium and entered the playing field. Sunil Gavaskar, who was on the commentary duty at that time, raised concerns about the security of players after the incident.

"These incidents happen because security people are not watching the crowd but are watching the match. This has been the perennial problem in India. The security is not there to watch the match for free. They are there to stop such interruptions from happening," Gavaskar said.

"I say put the camera on the security and check whether they are watching the match or the crowd. This is a dangerous security issue which is what you are there for, to make sure no one goes into the ground. Anyone can cause damage to a player. It has happened in the past, why take a chance," Gavaskar added.

The fan came on to the pitch and touched Rohit Sharma's feet. The incident took place when Vernon Philander had walked in to bat and Rohit was fielding in the slips.

Moreover, the incident on Saturday was the third case of pitch invasion in the ongoing three-match series.

As far as the match is concerned, Keshav Maharaj and Vernon Philander put on 109 for the ninth wicket to frustrate India for 43.1 overs in Pune.'

The tourists were eventually dismissed for 275, trailing the hosts by 326 runs.