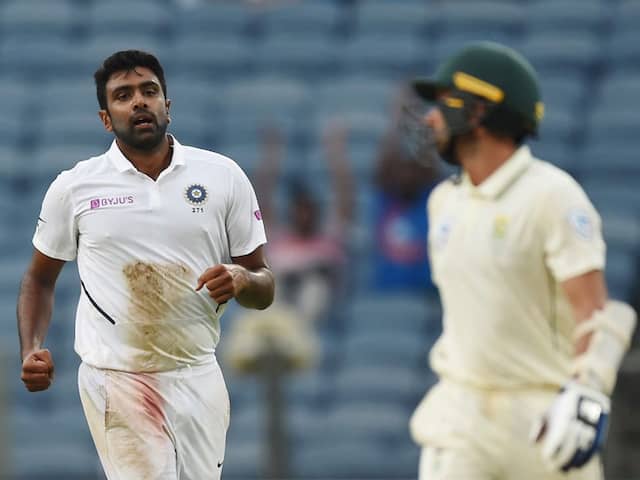 Keshav Maharaj and Vernon Philander's strong rearguard action for South Africa was brought to an end as Ravichandran Ashwin wrapped up South Africa's innings on Day 3 of the second Test in Pune. South Africa captain Faf du Plessis also put up a brave fight, scoring 64 before losing his wicket. Ravichandran Ashwin starred for India as he picked up four wickets, Umesh Yadav took three, Mohammed Shami two while Ravindra Jadeja chipped in with a wicket as South Africa were bowled out for 275, giving India a 326-run first innings lead.

South Africa began the day at 36 for the loss of three wickets. Mohammed Shami soon made it four as he removed night-watchman Anrich Nortje.

Faf du Plessis and Quinton de Kock then put up South Africa's first meaningful partnership before Ravichandran Ashwin bowled out the latter with a peach of a delivery.

Senuran Muthusamy, who impressed with his batting skills in the first Test, fell to Ravindra Jadeja, who trapped him LBW, to leave South Africa tottering at 139 for seven.

Du Plessis carried on his lone fight with Vernon Philander for company, but could only do so much as Ashwin drew the edge from his bat and Ajinkya Rahane snapped up the catch in the slips.

Keshav Maharaj, who had an injury concern, then joined Philander at the crease. The two batted valiantly and denied India until nearly the end of the day's play.

Maharaj scored his maiden half-century and it looked like the pair would see the day out for South Africa as they continued to frustrate India throughout the final session.

But Ravichandran Ashwin was not done for the day and removed Maharaj, who top-scored for South Africa with 72.

Ashwin then picked up his fourth wicket as he trapped Kagiso Rabada LBW.

India finished the day with a 326-run advantage over their opposition, with stumps being called after South Africa lost their last wicket.

It remains to be seen if India will enforce the follow-on or choose to come out to bat again.