Rohit Sharma smashed his fourth Test century as India dominated the proceedings against South Africa in a rain-affected day in Vizag on Wednesday. 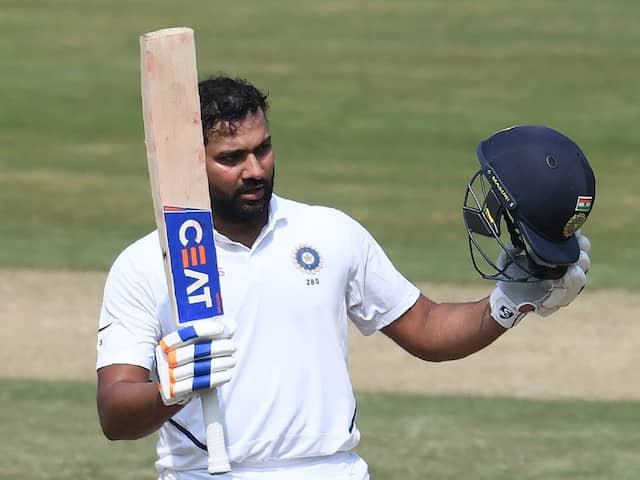 Rohit Sharma remained unbeaten on 115 on a rain-affected day in series opener vs South Africa.© AFP

Rohit Sharma brought up his fourth Test hundred and first as an opener in the longest format as India dominated the proceedings against South Africa in Vizag on Wednesday. Rohit Sharma got off the mark with a boundary and after surviving the initial burst from Kagiso Rabada and Vernon Philander, the 32-year-old decimated the South African attack on Day 1 as India posted 202/0 before rain washed out the final session. Rohit was well supported by Mayank Agarwal at the other end, who remained unbeaten on 84. Rohit smashed five sixes and 12 fours to reach 115 before bad light forced the umpires to take an early Tea break. Soon after the players went off the field, persistent rain forced the officials to abandoned the remainder of day's play.

After getting the measure of the surface, Rohit went for his strokes like he does in white-ball cricket. His first big hit was a typical one as he gently stepped out of the crease to smash Maharaj over long-on. A little later, he played a similar short off Piedt and this time the ball flew well above the long-on fielder.

Earlier, India captain Virat Kohli won the toss and opted to bat in the series opener.

Speaking about Rohit Sharma at the toss, Kohli said that he has clarity about his role in the team.

"He's excited to get the role clarity. It's a new opportunity for him," Kohli said at the toss.

For South Africa, Kagiso Rabada was the pick of the bowlers. The fast bowler managed to bowl five maiden overs out of the 13 he bowled on Day 1.

Rain can play spoilsport in the remainder of the first Test as heavy rain is predicted for the next four days in Vizag.