Ravichandran Ashwin became the joint-fastest to take 350 Test wickets, accomplishing the feat during Day 5 of the first Test of the three-match series against South Africa in Vizag. 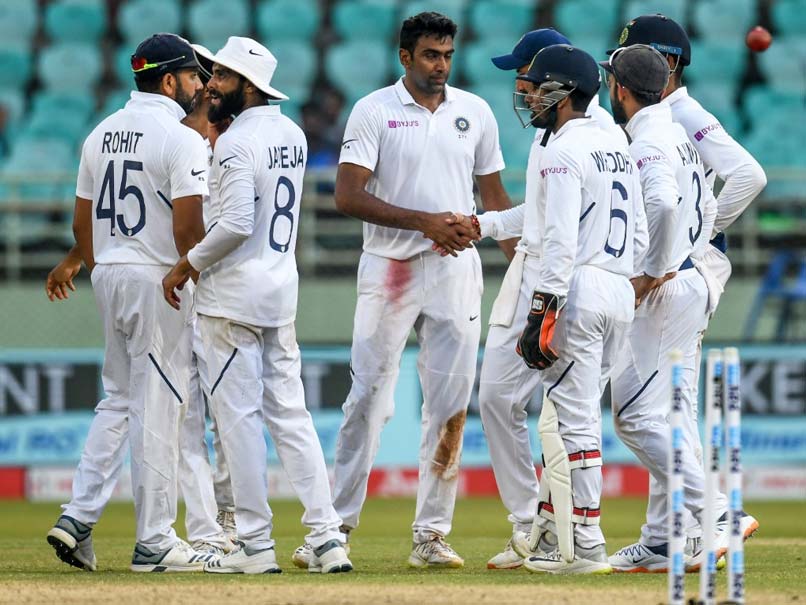 Ravichandran Ashwin made history on Sunday as he became the joint-fastest to take 350 Test wickets, accomplishing the feat during Day 5 of the first Test of the three-match series against South Africa in Vizag. The 33-year-old off-spinner had last played a Test match for India in December 2018 and failed to make the cut in the playing XI for the two-Test series against the West Indies. After claiming seven wickets in the first innings of the Vizag Test, Ravichandran Ashwin removed overnight batsman Theunis de Bruyn for 10 early in the morning session to reach the rare landmark in his 66th Test.

Congratulations @ashwinravi99 for getting fastest 350 test wickets.. wish u many more

Ashwin had bagged his 27th five-wicket haul on Friday and claimed his first wicket in the South Africa's second innings in De Bruyn on Sunday.

Earlier, when he claimed his 300th Test wicket, Ashwin became the fastest bowler to do so, breaking former Australia paceman Dennis Lillee's record in his 54 Test match.

India are eyeing a record 11th home series win in Test cricket. The number one-ranked Test team is currently leading the ICC Test Championship points table, thanks to a 2-0 clean sweep against the West Indies, and will consolidate their position at the top with another Test victory.

Starting their home series against South Africa, India rode on a double century by opener Mayank Agarwal to post 502 for seven after opting to bat. Agarwal scored 215 runs off 371 balls with the help of 23 boundaries and six sixes.

Rohit Sharma, batting at the top of the order for the first time in Test cricket, starred with a 176-run knock, including 23 boundaries and six sixes.

Ashwin then led the bowling attack with seven wickets to help India bowl out South Africa for 431 despite centuries by Dean Elgar and Quinton de Kock.

Rohit resumed his rhythm in the second innings with an impressive knock of 127 runs. He smashed 10 boundaries and seven sixes in his 149-ball knock.

Ravichandran Ashwin India vs South Africa, 2019 ACA-VDCA Stadium, Visakhapatnam Cricket India vs South Africa, 1st Test
Get the latest updates on Fifa Worldcup 2022 and check out  Fifa World Cup Schedule, Stats and Live Cricket Score. Like us on Facebook or follow us on Twitter for more sports updates. You can also download the NDTV Cricket app for Android or iOS.