Dean Elgar and Quinton de Kock kept the Indian bowlers at bay for most of Day 3 before Ravichandran Ashwin came back to record a five-wicket haul. 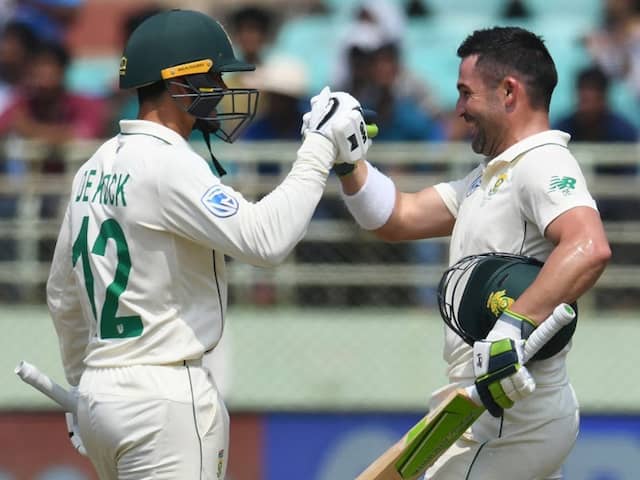 Dean Elgar brought up his 12th Test century and led South Africa's fightback in the first Test against India in Vizag on Friday. India were in absolute control at the close of play on day 2 as Ravichandran Ashwin picked up two wickets, while Ravindra Jadeja removed night-watchman Dane Piedt. Resuming at 39/3 on day 3, the South Africa opener forged vital partnerships with captain Faf du Plessis (55) and wicketkeeper Quinton de Kock (111), who scored his 5th Test century, to help the visitors reach 385/8 at stumps. South Africa still trail India by 117 runs but they managed to put pressure on the hosts at crucial junctures. During his knock of 160, including 18 fours and four sixes, Elgar forced India to constantly rethink their plans. The 32-year-old brought up his century with a slog-sweep six off Ashwin in the 60th over of the innings and became the first South Africa batsman to score a Test hundred in India after nine years. Hashim Amla was the last batsman from South Africa to score a hundred in India during their 2010 tour.

Ashwin claimed his 27th five-wicket haul in the longest format of the game, his first since August 2017, as India managed to break South Africa's resistance in the final session of the day.

India had come in to play on day three with the plan of attacking South Africa with R Ashwin's spin and Ishant Sharma's seam in tandem. Initially, the things did go as per the plan for the hosts as Ishant trapped Temba Bavuma in front of the stumps.

But Elgar and Du Plessis' had a 115-run stand, followed by the 164 runs added by Elgar and De Kock.

Elgar eventually fell as he went for the slog-sweep and got a big top edge off Jadeja. Cheteshwar Pujara, stationed at deep mid-wicket, ran forward, dived full length, stretched his arms out and caught the ball.

With the scalp, Jadeja claimed his 200th Test wicket, the fastest left-armer to reach the landmark ahead of the likes of Rangana Herath, Wasim Akram, Mitchell Johnson and Mitchell Starc.

After Elgar's departure, De Kock led South Africa's charge and brought up his century with a flat-bat maximum off Ashwin.

Ashwin then cleaned up De Kock with a perfect setup. The batsman lunged forward to deal with a non-turner from Ashwin but missed it completely. The ball sneaked between bat and pad to rattle the stumps, ending a gutsy knock from De Kock.

Ravichandran Ashwin India vs South Africa, 1st Test Cricket
Get the latest Cricket news, check out the India cricket schedule, Cricket live score . Like us on Facebook or follow us on Twitter for more sports updates. You can also download the NDTV Cricket app for Android or iOS.