India vs New Zealand, 2nd Test: The Spidercam provided some comic relief on Day 3 as a technical malfunction on it resulted in Tea being taken early in Mumbai. 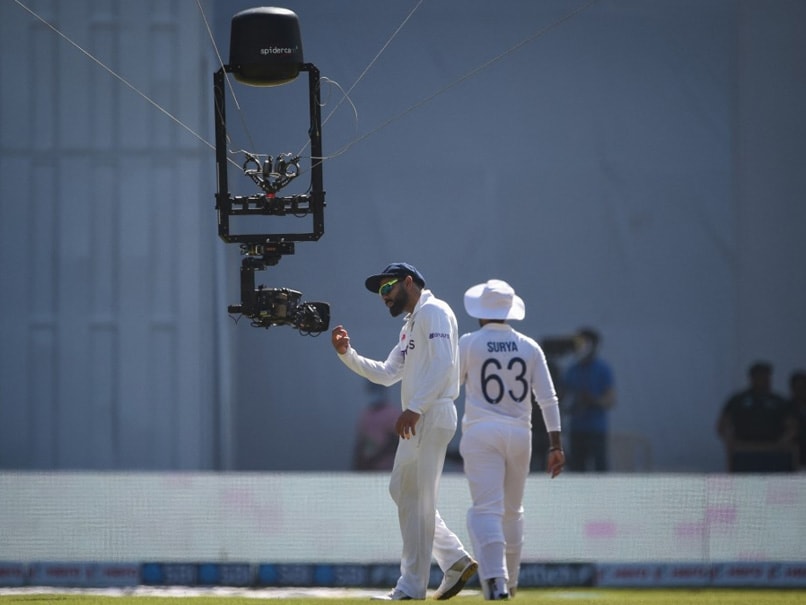 IND vs NZ: Virat Kohli checks on the spidercam on Day 3 of Second Test© AFP

In one of the most bizarre and strangest things to stop play, the Wankhede Stadium Spidercam forced players to take early Tea on Day 3 of the second Test. A buzz went around the stadium as players gathered around the Spidercam, which was hovering not too far above the ground and refusing to go back up. The entire situation soon led to some light moments shared by the Indian team contingent around the camera. The players took the opportunity to have some fun with Team India captain Virat Kohli and Suryakumar Yadav leading the way. While Kohli seemed to be interacting and making faces while looking into the camera, Suryakumar Yadav was quick to pose with his impressive glasses on.

One of the videos also showed Virat Kohli talking and gesticulating at the Spidercam and asking it to move back up.

The entire episode served as a perfect comic relief and led to a meme fest on Twitter.

Spider cam has no chill pic.twitter.com/D07mgEujj6

Virat Kohli and Suryakumar Yadav thought Spidercam isn't working so they came to check it. pic.twitter.com/IUdjaUphNP

New Zealand were placed at 13/1 after four overs with Daryl Mitchell joining Will Young at the crease. The visitor's lost the wicket of captain Tom Latham to spinner Ravichandran Ashwin right at the stroke of Tea.

Earlier in the day, India declared at 276 runs for the loss of seven wickets with Mayank Agarwal ending as the top-scorer once again for Team India.

For New Zealand, Ajaz Patel claimed four wickets and finished with extraterrestrial figures of 14 wickets for 225 runs in the two innings combined. Rachin Ravindra also bowled well for his three wickets in the second innings.

Wankhede India vs New Zealand 2021 Cricket India vs New Zealand, 2nd Test
Get the latest updates on SA vs IND 2021-22, check out the Schedule and Live Score . Like us on Facebook or follow us on Twitter for more sports updates. You can also download the NDTV Cricket app for Android or iOS.