"Test Debutant Of The Year": Former Cricketers, Experts Praise Axar Patel For Another Five-Wicket Haul In Tests vs New Zealand

India vs New Zealand, 1st Test: Spinner Axar Patel garnered immense praise from all parts of the cricketing circles as he claimed another five-wicket haul in the longest format during the first Test vs New Zealand in Kanpur. 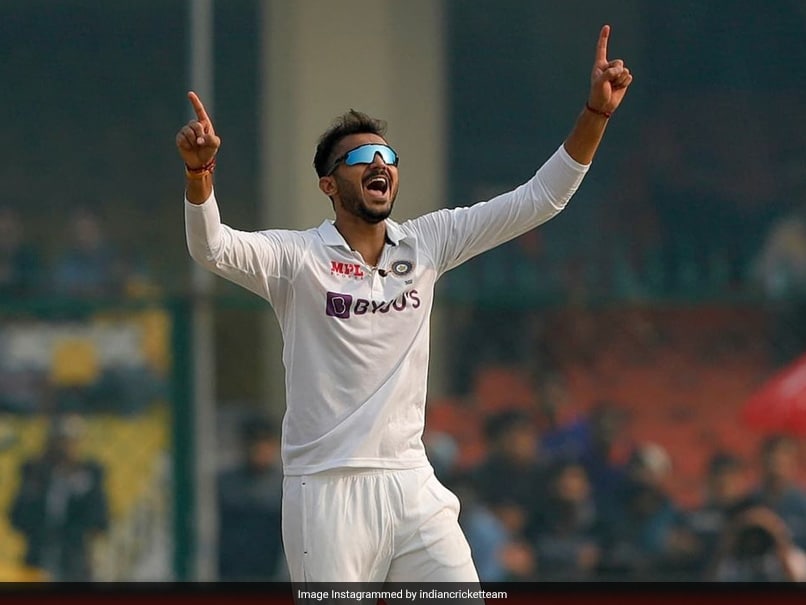 Left-arm spinner Axar Patel once again proved his worth in Indian conditions as he registered yet another five-wicket haul in Tests on Day 3 of the ongoing first Test vs New Zealand in Kanpur. Patel dismissed Tim Southee for five runs to complete his fifth fifer in four games for the senior side. Earlier, Patel bagged the crucial wickets of Tom Latham, Ross Taylor, Henry Nicholls and Tom Blundell as he powered his way through a clueless New Zealand middle-order. Former cricketers and experts like Aakash Chopra, Wasim Jaffer, Ayaz Memon and others praised the spinner for his brilliant outing with the ball.

Chopra went a step further and hailed Axar as the "Test Debutant of the year."

"Axar Patel-Test debutant of the year. Without a shadow of doubt. Another 5-fer. #IndvNZ."

Axar Patel-Test debutant of the year. Without a shadow of doubt. Another 5-fer. #IndvNZ

Memon also praised Axar for his stupendous show with the ball.

"Fifth 5-wicket haul in 4 matches for Axar Patel. He's deadly on such pitches. NZ paying price for batsmen being ultra-cautious. Not showing enterprise or gumption to hit boundaries and scatter close in field, unable to rotate strike either, allowing bowlers to build up pressure."

Fifth 5-wicket haul in 4 matches for Axar Patel. He's deadly on such pitches. NZ paying price for batsmen being ultra cautious. Not showing enterprise or gumption to hit boundaries and scatter close in field, unable to rotate strike either, allowing bowlers to build up pressure

Wasim Jaffer expressed his happiness in his own unique style and posted:

New Zealand were finally dismissed for 296 runs in their first innings in reply to India's 345. Apart from Axar, Ravichandran Ashwin bagged three wickets while one wicket was taken each by pacer Umesh Yadav and spinner Ravindra Jadeja.

The joy of an important 49-run lead was short lived as India got off to a bad start in their second innings. Opener Shubman Gill was dismissed by pacer Kyle Jamieson early-on to provide the visitors first breakthrough in their bid to restrict India quickly.

This was Jamieson's 50th Test wicket which came in his 9th Test. He therefore became the fastest New Zealand bowler to the mark, eclipsing Shane Bond who achieved the feat in 12 Tests.

However, Early Stumps was taken as Cheteshwar Pujara and Mayank Agarwal were offered the light with India placed at 14/1, leading by 63 runs.

Tim Southee Kyle Jamieson India vs New Zealand 2021 Cricket
Get the latest updates on IPL Auction 2023 and check out  IPL 2023 and Live Cricket Score. Like us on Facebook or follow us on Twitter for more sports updates. You can also download the NDTV Cricket app for Android or iOS.