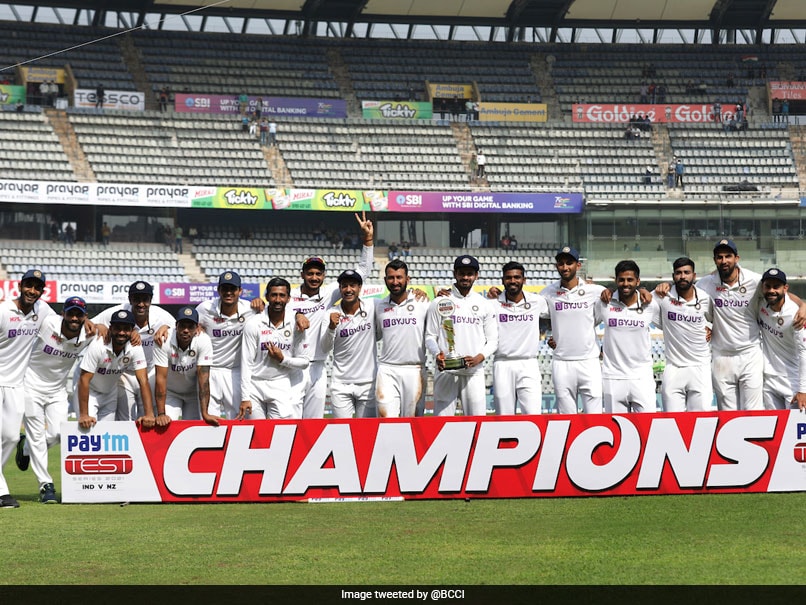 Indian bowlers once again proved too hot handle as New Zealand's batting crumbled on Day 4 of the second Test with Virat Kohli's team registering a massive 372-run to win the two-match Test series 1-0. Having bundled out New Zealand for a paltry 62 in the first innings, India skittled out the visitors for 167 in the second to notch an emphatic win in Mumbai. India wrapped up the match in double quick time on Day 4 with the New Zealanders losing their last five wickets for just 27 runs. This was India's first Test win under new coach Rahul Dravid.

New Zealand had just about saved the first Test with debutant Rachin Ravindra putting in stubborn batting display, however, India were not to be denied this time with Ravichandran Ashwin and Jayant Yadav taking four wickets each in the second innings.

The 372-run win was India's biggest in Test cricket in terms of runs, bettering the previous best of 337 against South Africa in 2015.

While New Zealand's batting left a lot to be desired, the visitors still have a reason to remember the Test fondly.

New Zealand spinner Ajaz Patel became only the third bowler in the history of Test cricket to pick all 10 wickets in an innings. He ended with match figures of 14/225 -- the most wickets against India in a Test match.

However, that will only be a consolation for New Zealand, who are currently the World Test champions. The visitors were completely outplayed in the second Test with the Kiwi batting crumbling under the pressure of the Indian spinners.

While the likes of Ashwin, Jayant Yadav and Axar Patel were almost unplayable at times, the hero of the Test with bat in hand for India was Mayank Agarwal.

Agarwal scored a brilliant 150 in the first innings and followed it up with a free-flowing 62 in the second. With the likes of KL Rahul and Rohit Sharma absent from the series, this was a big statement from the right-handed opener with the South Africa tour around the corner.

India do have a problem of plenty but it's a good headache to have. However, question marks still remain over Ajinkya Rahane's future. With young guns like Shreyas Iyer, who scored his maiden Test century in the first Test, doing well, time could be running out for Rahane.

Virat Kohli India vs New Zealand 2021 India vs New Zealand, 2nd Test Cricket
Get the latest updates on SA vs IND 2021-22, check out the Schedule and Live Score . Like us on Facebook or follow us on Twitter for more sports updates. You can also download the NDTV Cricket app for Android or iOS.