India vs England (IND vs ENG) T20 Series 2021: Jos Buttler smashed 83 off 52 balls to help England defeat India in the third T20I, at the Narendra Modi Stadium. The visitors have also taken a 2-1 lead in the five-match series. 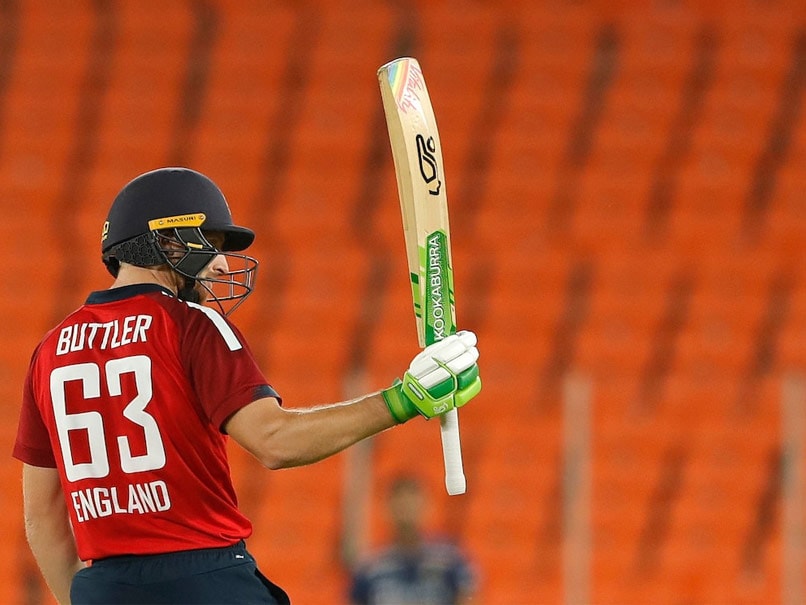 IND vs ENG: Jos Buttler celebrates his half-century against England during the 3rd T20I.© BCCI

Opener Jos Buttler smashed an unbeaten half-century to help England defeat India by eight wickets in the third T20I on Tuesday, at the Narendra Modi Stadium in Ahmedabad. The win has also helped the visitors take a 2-1 lead in the five-match series. In reply to India's target of 157 runs, England recovered brilliantly from an early wicket loss, to cruise to an easy victory with 10 balls to spare. Buttler slammed 83 off 52 balls, packed with five fours and four sixes, and was well-supported by Jonny Bairstow (40), as England reached 158/2. Yuzvendra Chahal and Washington Sundar took a wicket each for India. Earlier, India had posted 156 for six in 20 overs, with captain Virat Kohli cruising to an unbeaten knock of 77 in 46 balls. Despite his fine knock, the other Indian batsmen faltered against England's bowlers. Pacer Mark Wood took three wickets, and Chris Jordan registered two dismissals. Both sides will face each other once again in the fourth T20I, which will take place on March 18. India will be aiming to level the series, and England will be hoping to seal the series in the fourth T20I. (SCORECARD)

Jason Roy Ishan Kishan India vs England 2020-21 India vs England, 3rd T20I Cricket Live Score Live Cricket Score Live Blogs
Get the latest updates on Fifa Worldcup 2022 and check out  Fifa World Cup Schedule, Stats and Live Cricket Score. Like us on Facebook or follow us on Twitter for more sports updates. You can also download the NDTV Cricket app for Android or iOS.