India vs England (IND vs ENG) ODI Series 2021: Jonny Bairstow slammed a century to help England defeat India in the 2nd ODI, at the MCA Stadium in Pune. The visitors also levelled the series. 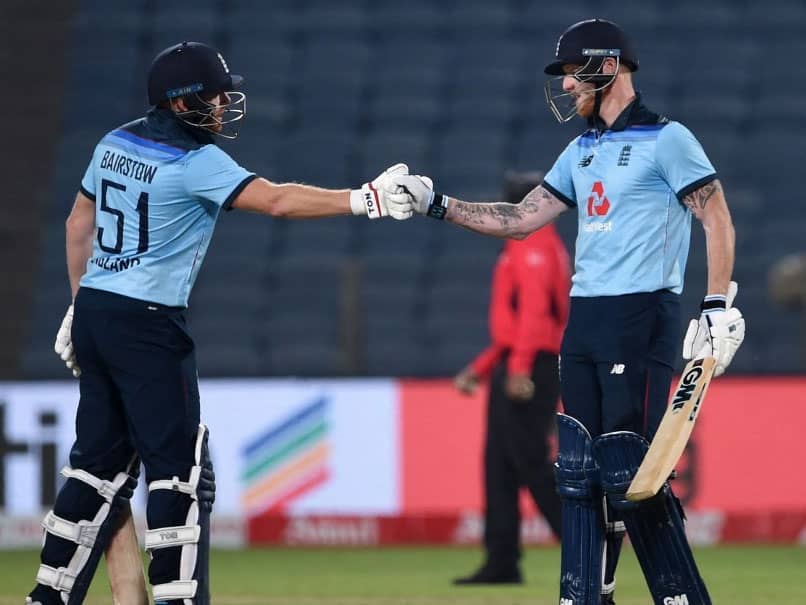 IND vs ENG: Ben Stokes, Jonny Bairstow during the second ODI, at the MCA Stadium in Pune.© AFP

England defeated India by six wickets in the second ODI, at the MCA Stadium in Pune, on Friday. The visitors also levelled the series, 1-1. Chasing a target of 337 runs, openers Jason Roy and Jonny Bairstow started brilliantly for the visitors, piling continuous pressure on Indian bowlers. Roy slammed 55 runs before his departure due to a run out. Bairstow was well-supported by Ben Stokes, and scored 124 off 112 balls. Stokes missed out on a century, losing his wicket after scoring 99 runs. Dawid Malan (16) and debutant Liam Livingstone (27) remained unbeaten to help their side seal a win, finishing at 337 for four in 43.3 overs. India's bowling order put in a poor display, with Prasidh Krishna taking two wickets and Bhuvneshwar Kumar registering a dismissal. Earlier, the hosts wrapped up their first innings at 336 for six in 50 overs, with KL Rahul scoring a ton (108 off 114). Virat Kohli (66) and Rishabh Pant (77) also made noteworthy contributions, but couldn't prevent a defeat for their side. Reece Topley and Tom Curran took two wickets for England. Meanwhile, Sam Curran and Adil Rashid registered a dismissal each. (SCORECARD)