India vs England: Virat Kohli Gears Up For "New Mission" Ahead Of England T20Is. See Pictures

India vs England: Virat Kohli and the rest of the Indian contingent is now gearing up for a stiffer challenge in the T20 Internationals after their famous win in the Test series. 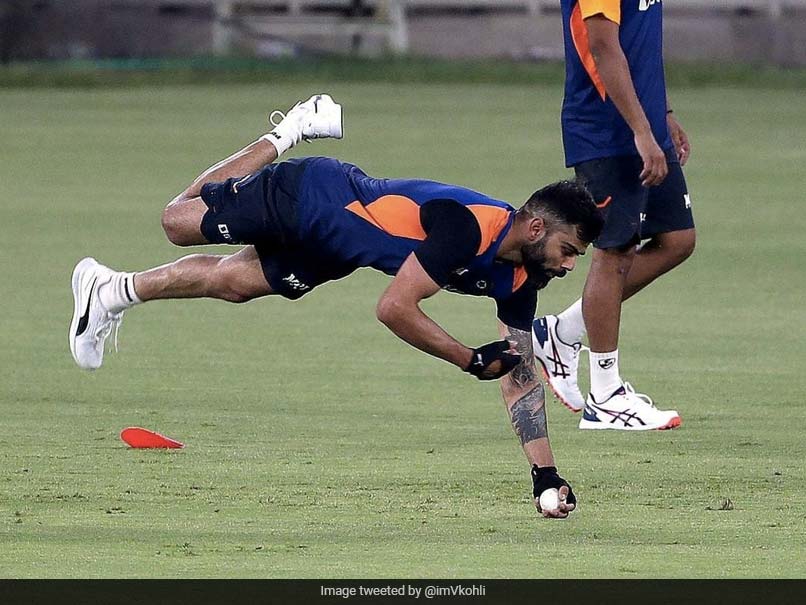 Virat Kohli posted pictures from his training session ahead of the T20I series vs England.© Twitter

Virat Kohlitook to social media on Thursday to share a few pictures from his training session ahead of the Twenty20 International (T20I) series against England, starting Friday. In the pictures, Kohli can be seen doing fielding drills, warming up by playing football and batting in the nets. "New week, new format, same mission. Let's get it," Kohli tweeted along with an Indian flag emoji. The Indian skipper also posted a video of himself practising big shots while having a net session as he geared up for the shortest format of the game.

Kohli had a quiet series with the bat in the recently-concluded Test series against England.

In the four-match Test series, the India captain scored just 172 runs from six innings at an average of 28.76.

Kohli will be looking to turn things around in the upcoming five-match series.

All the five T20Is will be played at the Narendra Modi Stadium-- the world's largest cricket stadium.

In India's last T20I series, Kohli was the highest run-getter for his side as he had smashed 134 runs from three outings at a strike-rate of 142.55.

The last time India played against England in a T20I, the star of the show was Rohit Sharma, who scored a century, but Kohli's quick-fire 43 off 29 balls was also crucial in India chasing down 199 with eight balls to spare.

Virat Kohli India vs England 2020-21 Cricket
Get the latest updates on IPL 2021, check out the IPL 2021 Schedule and Indian Premier League Live Score . Like us on Facebook or follow us on Twitter for more sports updates. You can also download the NDTV Cricket app for Android or iOS.