India vs England: India need to avoid defeat in the final Test against England to seal a spot in the World Test Championship final against New Zealand. 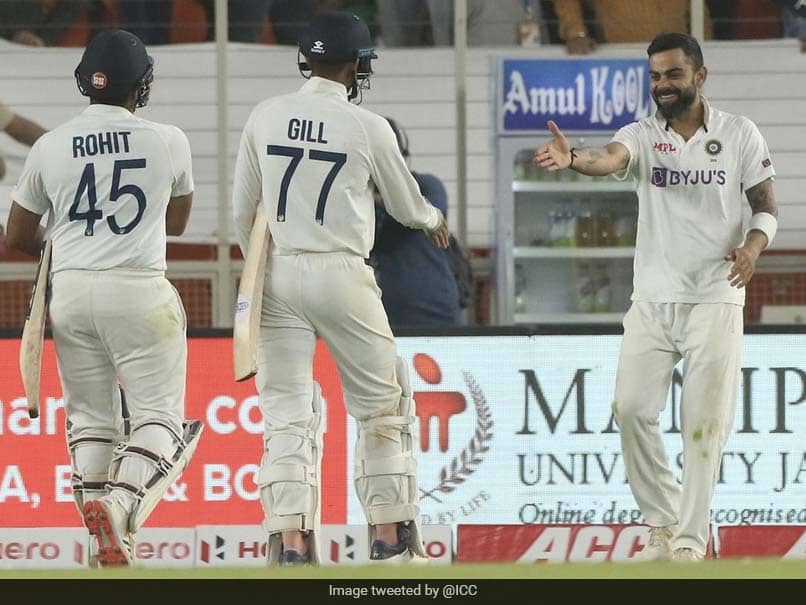 IND vs ENG: India beat England by 10 wickets to go 2-1 up in the ongoing four-match series.© Instagram

India beat England by 10 wickets in the third Test in Ahmedabad to put one foot in the World Test Championship final. But, while England have been knocked out of contention for a place in the final, India still need to ensure that they come out undefeated in the fourth Test - also to be played at the Narendra Modi Stadium - to book a place against New Zealand at the final in Lord's. If India lose, however, Australia will go through to the WTC final.

India's win propelled them to the top of the WTC table, but due to the standings being decided on percentage of matches won, a draw or defeat in the final Test against England would see them slip behind both New Zealand and Australia

Twitter was full of reactions as India closed in on the final of the inaugural edition of the WTC.

"Congrats to Team India for the two-day win which keeps them in the race for the WTC Final! Axar and Ashwin were exceptional, but the batsmen will eye an improved show in the final Test," wrote former India batsman VVS Laxman.

Congrats to Team India for the two-day win which keeps them in the race for the WTC Final! Axar and Ashwin were exceptional, but the batsmen will eye an improved show in the final Test. #INDvsENG

India should look to finish strong at 3-1. It's not everyday you get to beat both England and Australia in the same game. #WorldTestChampionship pic.twitter.com/XCTozfwKgf

There were memes too, of course.

Two days test match...boys are in a rush for an early weekend party!#INDvENG #WTC

England out of World test championship. @ECB_cricket will make a pitch like this for final for sure.#ENGvIND #bbccricket #Cricket #JayShah pic.twitter.com/glCzS1qcGc

England should just play for a draw or let India win out of goodness of their hearts and let them go to the final of the World Test Championship. #INDvsENG

India is back on the top of World Test Championship
The Art The Artist pic.twitter.com/D4iWOUIsV7

The WTC final is scheduled to be held from June 18-22, with June 23 kept as a reserve day.

England Cricket Team India vs England, 3rd Test Cricket
Get the latest updates on IPL 2021, IPL Points Table , IPL Schedule 2021 , live score . Like us on Facebook or follow us on Twitter for more sports updates. You can also download the NDTV Cricket app for Android or iOS.