India vs England Test Highlights: Ravichandran Ashwin put in an excellent bowling display for the hosts, taking six wickets on Day 4 but England were still ahead with India needing to complete a mammoth chase. 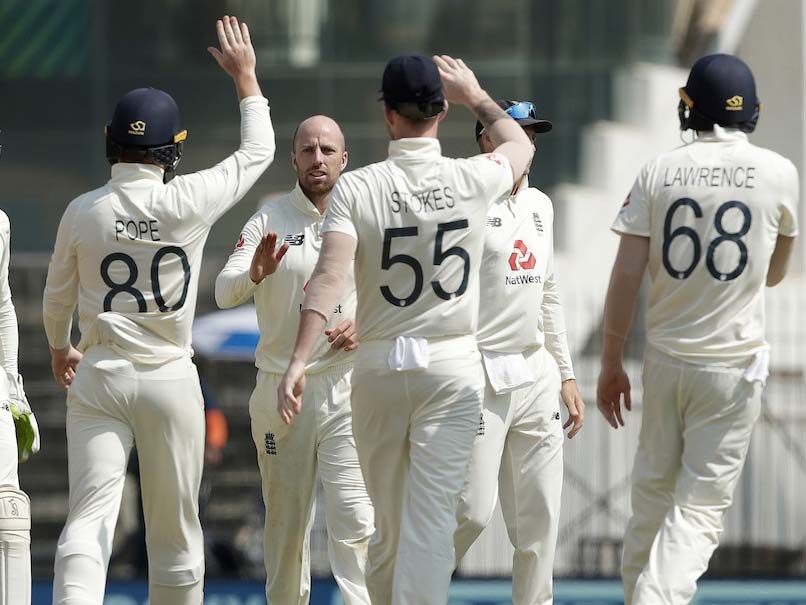 IND vs ENG: Jack Leach celebrates after taking a wicket in the first Test match in Chennai.© BCCI

Losing an early wicket in their second innings, India were put in a difficult position by England on Day 4 of the first Test match at the MA Chidambaram Stadium, in Chennai. The hosts were 39 for one at Stumps and need 381 more runs to win. India had a shaky start to their second innings, losing opener Rohit Sharma to a brilliant delivery from Jack Leach. Rohit could only muster 12 runs from 20 balls before being sent back to the hut. However, Shubman Gill (15) and Cheteshwar Pujara (12) remained unbeaten and ensured there were no more setbacks before the close of play. Earlier on Day 4, England scored 178 runs in their second innings, setting a target of 420 runs. Joe Root was the top performer for the visitors, scoring 40 off 32 deliveries. Ravichandran Ashwin was in top form for India, taking six wickets which included the dismissals of Rory Burns (0), Dom Sibley (16), Ben Stokes (7), Dom Bess (25), Jofra Archer (5) and James Anderson (0). Shahbaz Nadeem took two wickets, while Ishant Sharma and Jasprit Bumrah chipped in with one each. On Day 5, the hosts will be hoping to build a steady partnership and not lose early wickets. (SCORECARD)

Ravichandran Ashwin Dom Bess India vs England 2020-21 Cricket India vs England, 1st Test Live Score Live Cricket Score Live Blogs
Get the latest updates on Fifa Worldcup 2022 and check out  Fifa World Cup Schedule, Stats and Live Cricket Score. Like us on Facebook or follow us on Twitter for more sports updates. You can also download the NDTV Cricket app for Android or iOS.