India vs England: Ajinkya Rahane Spends Day One Of Quarantine In Chennai Playing With Daughter

India Test vice-captain Ajinkya Rahane spent parts of his first day in quarantine in Chennai, ahead of the first Test against England, playing with his daughter. 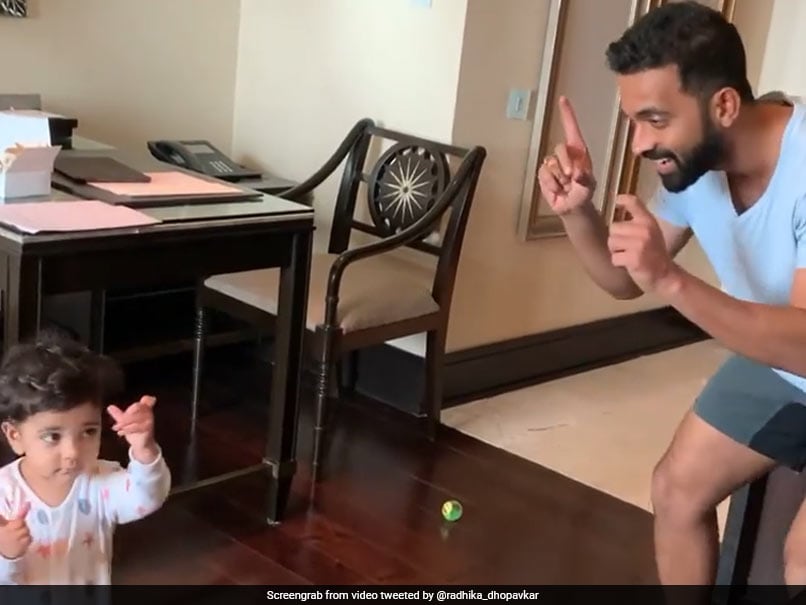 Ajinkya Rahane spent part of the first day of quarantine in Chennai ahead of India's first Test against England playing with his daughter as seen in a video posted on social media by his wife Radhika, who termed the father-daughter duo "My entertainment in quarantine." Rahane, who led the Indian team in the last three Tests of the Australia tour, will return to his duty as vice-captain of the team while captain Virat Kohli, who was on a paternity leave, makes a comeback. Team India players started arriving in Chennai on Wednesday as evident from Mohammed Siraj and Cheteshwar Pujara posting their whereabouts on social media.

Rahane led India to a historic series win in Australia as India won the deciding Test in Brisbane to take the Border-Gavaskar series 2-1.

It was only the second time that India had won a Test series on Australian soil, the previous instance being their last tour Down Under in 2018-19.

Beside Rahane and Kohli returning to their usual roles, all-rounder Hardik Pandya and fast bowler Ishant Sharma, who suffered injuries during the Indian Premier League last year, also returned to the squad.

Meanwhile, members of the England cricket team also arrived in Chennai on Wednesday after the completion of their tour to Sri Lanka.

The first two Tests of the series between India and England will be played at the MA Chidambram Stadium in Chennai.

The remaining two Tests will be played in Ahmedabad's Motera Ground, which will also host the five-match T20I series, before teams move to Pune for three ODIs.

Ajinkya Rahane Cricket India vs England 2020-21
Get the latest updates on Fifa Worldcup 2022 and check out  Fifa World Cup Schedule, Stats and Live Cricket Score. Like us on Facebook or follow us on Twitter for more sports updates. You can also download the NDTV Cricket app for Android or iOS.