Haryana leg-spinner Amit Mishra says England batsmen will have to use all the skill they have to counter Indian spinners. 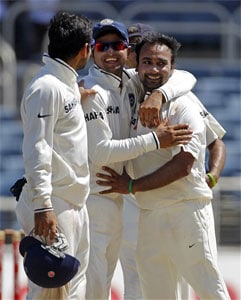 In the three warm-up matches England have played, they have come up against 146.2 overs of spin in a total of 458.2 overs bowled. Knock out the part-time spinners from this list, and England have only played 48.3 overs of quality spin in match situations since arriving in India on October 29.

In the final warm-up match, Amit Mishra led Haryana, and though he picked up four wickets in 17.1 overs in the first innings, he did not bowl at all in the second. "There were no instructions that I should not bowl or anything like that," clarified Mishra soon after the game. "I had a cut on my spinning finger and was finding it hard to grip the ball. Before play on the fourth morning I tried to bowl, but wasn't able to."

Although he did not have a chance to bowl to the England batsmen as much as he would have liked, Mishra did watch them from close quarters. "There's a big difference between how our batsmen play spin and how their batsmen play spin, there's no doubt about that. They are a bit weak against spin," said Mishra. "Our Test spin bowlers are very skillful and the England batsmen will have to use all the skill they have to counter this. It will be hard work for England's batsmen against our spinners."

Given the fact that England lost eight of nine first innings wickets to spin on a pitch that skidded on and never really gripped, things could get quite difficult, if there was assistance for R Ashwin and Pragyan Ojha, Mishra warned. "It will be difficult. On a turning track, or if there's bounce it's going to be tough for them, because they attack when in doubt. They have limited shots to counter spin, the skillset they have is different."

While it seems a bit churlish to suggest that England did not play spin well, when they managed 521 runs at 4.4 an over in their first innings, Mishra explains why this is so. "When you're not comfortable the instinct is to jump out and hit. Traditionally, England's batsmen are more comfortable playing pace and swing, rather than spin, this is well known," said Mishra. "The reason they step out against spin is because they're not completely comfortable playing the spin and want the bowler to change his line and length. If someone was totally in control and comfortable, he wouldn't have to resort to playing risky shots. He would rather use his skills to drive, to play along the ground to long-on and long-off when the field is back, to cut from the stumps, or just read the ball out of the hand and defend with confidence."

While the lack of spin bowling meant that the penchant for the sweep was not as much in evidence as usual, Mishra warned that this was a stroke that batsmen lived by and died by. "When it's a batting pitch you can play the sweep without worry. But when there is a bit of turn or bounce, or both, then it becomes a high-risk shot," said Mishra. "The risk of a top-edge, of missing the ball and getting hit on the pad, of being bowled, all increase when sweeping on a pitch that helps spinners. Generally batsmen only resort to the sweep when they have limited shots or scoring shots to counter the spinners."

Before he could sign-off, recover from his niggle and plan for the Ranji season ahead, we put Mishra on the spot to ask him for specific plans against England's top order. Since this is the season of dossiers on the opposition, here are Mishra's suggestions on how to keep England down:

Cook is most comfortable playing on the back foot. The ideal thing to do is pick a spot and keep bowling to him with subtle variations. Block the scoring options off the back foot, keep the ball on one spot and encourage him to come forward. Then he goes back to the sweep or comes down the pitch, and you're in business.

Even he was not comfortable. Trott's strategy seems to be to come down the pitch or sweep with an aim to get the bowler to feed him what he can play from the back foot. Instead, hold a single line and make him play off the front foot. When he steps out, think of it as a good sign.

I agree that he's an attacking batsman and a very good one, but if you look at the number of times he's been dismissed by spin, including part-timers such as Yuvraj Singh, you get the feeling he's not totally comfortable. His strength is that he does not allow the spinner to settle. He's tall and uses his reach very well. That helps him more than anything else.

He does have skill. He waits for the ball and plays late and he is also not afraid to use his feet. He has the right temperament. If any of the English batsmen manage to do well in India - and that will be hard - it will be Bell and KP.

I guess England will try and use him as someone who can bowl 10 or 15 overs an innings and contribute. In these conditions the fast bowlers will need proper breaks and he may be used to achieve that.

Comments
Topics mentioned in this article
Cricket Amit Mishra Daniel Vettori Dirk Nannes Delhi Daredevils India vs England 2012 England Cricket Team India Cricket Team
Get the latest Cricket news, check out the India cricket schedule, Cricket live score . Like us on Facebook or follow us on Twitter for more sports updates. You can also download the NDTV Cricket app for Android or iOS.