Sent into bat, India were all out for 226 and Dhoni said the home team were 30-35 runs short of the target they would have liked to set before England at the picturesque HPCA Stadium which made its ODI debut. 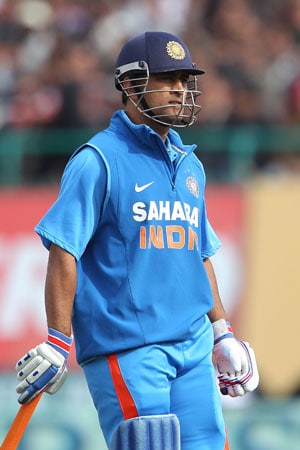 Captain Mahendra Singh Dhoni on Sunday said had India batted "more sensibly", the hosts could have won the fifth and final ODI here and wrapped up the series by a bigger margin.

Sent into bat, India were all out for 226 and Dhoni said the home team were 30-35 runs short of the target they would have liked to set before England at the picturesque HPCA Stadium which made its ODI debut.

"The ODI series was as tight as the Test series. We should have won this game, maybe we should have batted more sensibly. We were 30-35 runs short," Dhoni said at the post-match presentation.

"But it is a young side and it will learn with time."

Although he lauded the bowlers' performance in this series, Dhoni said death bowling still continues to haunt India.

"Thankfully, in three games, we didn't have to bowl those death overs, it remains an area of concern.

"Today bowlers got some help, maybe they were a little short today. The bowlers did well this series because the conditions really helped them too. Ishant was a big positive, he bowled really well throughout the series, if you look spell by spell," he said.

"Fielding is a big positive. (Ravindra) Jadeja's form solves the all-rounder problem to an extent too," he added.

Visiting skipper Alastair Cook said England has many positives to take from this tour despite losing the ODI series 2-3.

England notched up a comprehensive victory by seven wickets and Cook attributed the win in the fifth and final ODI to team effort.

"It was a good win, it was a good toss to win, but our bowlers bowled really well. (Tim) Bresnan and (Steven) Finn got early breakthroughs today. Our top four got runs and (Ian) Bell played a fantastic knock," Cook said.

"The pitch was doing something all day, so it was important to stick around with wickets in hands, it is important with the new regulations.

"We have good positives to take from this series. It has been a fantastic three months in India," Cook said.

Bell, who was declared man-of-the-match for his unbeaten 113-run knock, credited the English bowlers for setting up the win.

"Our bowlers set up the win but 220 odd was a good target to chase. I really love opening the batting and hopefully I can continue to do this in future," he said.

Man-of-the-series Suresh Raina, who scored a fantastic 83 today, also agreed with his skipper and said that India were a few runs short.

"When we came to this series, we had lost to Pakistan in ODIs and England in Tests, so this win has been good. Today we were probably 20-30 runs short, but still we batted well in this series," said Raina, who is the highest scorer in the ODI series with 277 runs at an average of 92.33.

"When you bat 6, 7 you don't get many opportunities, but this series, our top order didn't get runs, so I got time in the middle," he said.

Comments
Topics mentioned in this article
Cricket India vs England 2012 India Cricket Team England Cricket Team MS Dhoni Alastair Cook
Get the latest updates on India vs Australia and check out  Schedule, Results and Live Score. Like us on Facebook or follow us on Twitter for more sports updates. You can also download the NDTV Cricket app for Android or iOS.