Ian Bell's unbeaten century guided his team to a win and helped England end the series on a high, despite losing it a match earlier. 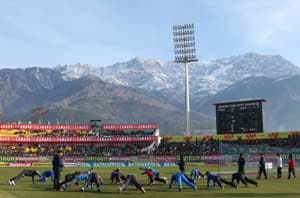 England earned a consolation win at Dharamsala but it was by a comprehensive margin of 7 wickets. A look at the statistical highlights from the first international match here and the final of the series.

# Tim Bresnan (4/45) has recorded his second best bowling figures against India in ODIs, behind the 5 for 48 at Bangalore on February 27, 2011. The said feat is his second four-wicket haul against India - his fourth occasion of four wickets or more in anÂ  innings in ODIs.

# In the course of his superb innings, Bell has completed his 4,000 runs in ODIs, totalling 4017 at an average of 36.85 in 124 matches.
He became the eighth player to have accomplished the feat of completing 4,000 runs for England in ODIs.

# The unfinished match-winning partnership of 84 for the fourth wicket between Bell and Morgan is Englnd's fifth highest against India in ODIs.

# Bell has received his eighth Man of the Match award in ODIs - his third against India.

# Raina has registered four fifties in a row for the first time.Â  He had posted 50 at Rajkot, 55 at Kochi, 89 not out at Mohali and 83 at Dharamsala.Â  He is the sixth player to post four fifties or more against England in ODIs.

# Raina's 28th half-century in ODIs is his eleventh the against England.

# Raina has got his first Player of the Series award in ODIs.

# Bhuvneshwar Kumar (31 off 30 balls) has recorded his highest score in ODIs.