Alastair Cook admits winning the toss was crucial in Dharamsala

The 28-year-old skipper was full of praise for centurion Ian Bell, who scored an unbeaten 113 to guide England to overhaul the target with 16 balls to spare. 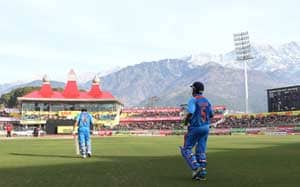 England captain Alastair Cook on Sunday, admitted that it was an "important toss to win" and they possibly couldn't have lost the match once his bowlers dismissed India's top four batsmen for only 49 runs during the fifth and final ODI here.

"It was an important toss to win. But you still have to execute your skills and I thought our opening bowlers did that very well. 49 for four gave us a great chance to win and we did that," a relieved Cook said at the post-match press conference today after his team comfortably defeated India by seven wickets.

The 28-year-old skipper was full of praise for centurion Ian Bell, who scored an unbeaten 113 to guide England to overhaul the target with 16 balls to spare.

"Belly's hundred today was outstanding. It sometimes is easy to talk the talk but to go out there and do it like he did today is something we can take a lot from."

"It was very important to end the series on a high. There's always disappointment when you come and try to win a series and then lose 3-2. I thought the way the lads performed today was really good," he said.

Asked about the positives that he took from the series, Cook said, "Obviously the relationship with Ashley Giles in first series as coach. All the players have been getting to know him and his methods and obviously that will grow as time goes on.

"We learnt a lot about some of our players. James Tredwell has had an outstanding series. He just gets on with his business and produces the goods. Steven Finn has bowled well again and Joe Root coming in, who wasn't an original selection, has taken his chance very well," Cook assessed.

Cook is happy that there will be competition for some of the slots when senior players such as Stuart Broad, James Anderson and Graeme Swann make a comeback into the side.

"It's been a young squad here and with the senior lads coming back, it adds a lot of competition for places. We've had a really good couple of years in ODIs, so of course we're a little bit disappointed in the result of the series but we take a lot through to New Zealand," he said.

Although a 2-3 series loss is not demoralizing by any stretch of imagination but Cook is not ready to buy that consolation.

"We're not really in it for decent efforts. When we played to our potential, we win games and when we have played well, we put India under some pressure. Obviously, games two and three, we didn't do that," he said.

Man of the match Bell said that pitch had become easier for batting in the second session and he was happy to finally convert a start into a big score.

Comments
Topics mentioned in this article
Cricket India vs England 2012 India Cricket Team England Cricket Team Ian Bell Himachal Pradesh Cricket Association Stadium, Dharamsala Alastair Cook
Get the latest updates on India vs Australia and check out  Schedule, Results and Live Score. Like us on Facebook or follow us on Twitter for more sports updates. You can also download the NDTV Cricket app for Android or iOS.