Raina is a finisher but can bat up the order: Gavaskar

Suresh Raina's skills as a finisher has helped India on several occasions. He himself however has expressed a desire to bat up the line-up. 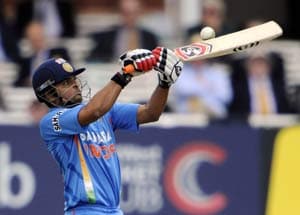 Suresh Raina hit his fourth half-century of the series against England, on Sunday. With it, he completed 4000 runs and this despite batting lower down the order. Former cricketer Sunil Gavaskar feels that purely going by his batting skills, Raina should come up the line-up.

The hosts were in trouble against England and were reeling at 49 for 4 before Raina came to the middle to support the dwindling innings. While Gavaskar admits that the 26-year-old is a superb finisher, he tells NDTV that he can bat at the number three or four spot as well. "I am surprised that he (Raina) does not bat at number three because he does bat at number three for India in T20 tournaments. I imagine that he should be batting at three or four. It hasn't happened because India look upon him to be a finisher. But as a batsman, you want to bat higher up the order," he said.

Raina has registered strong performances in the recently concluded series which India won 3-2 despite losing the final match at Dharamsala. He slammed 332 runs, averaging almost 111 in four innings.

Ian Bell was the other star-performer of the match with an unbeaten 113 to his credit. Gavaskar said batting up the order has helped him and can, similarly, further help Raina. "When you bat up the order, you get many more balls to bat, to settle down. Have a look at what it has done to Ian Bell. The two times England won in this series, he has been the one with the big runs."

England had won the first match - played in Rajkot - before surrendering in the next three. Bell had hit 85 off 96 in the opening match.

Comments
Topics mentioned in this article
Cricket India vs England 2012 England Cricket Team India Cricket Team Suresh Raina Sunil Manohar Gavaskar
Get the latest updates on India vs Australia and check out  Schedule, Results and Live Score. Like us on Facebook or follow us on Twitter for more sports updates. You can also download the NDTV Cricket app for Android or iOS.