Virat Kohli was impressed with the performance of his fast bowlers Ishant Sharma, Mohammed Shami and Umesh Yadav in India's big win over Bangladesh in Indore. 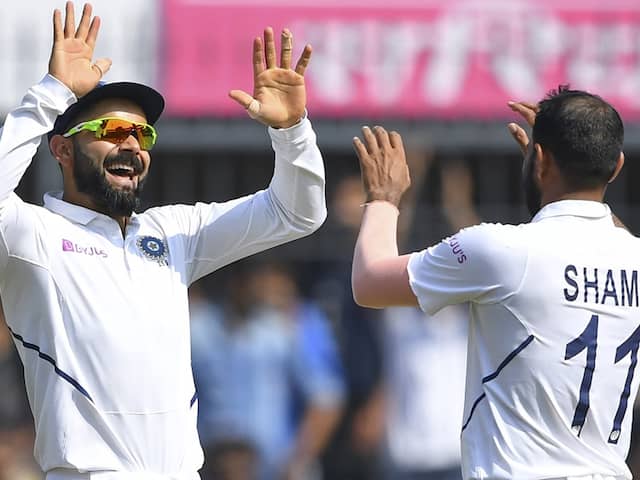 Mohammed Shami was the pick of the bowlers in first Test.© AFP

Virat Kohli was elated with his team's performance after their emphatic victory over Bangladesh in the Indore Test on Saturday. The fast bowling trio of Ishant Sharma, Mohammed Shami and Umesh Yadav shared 14 wickets between them in the first Test and Virat Kohli believes they were on the top of their game. The India captain also said the current crop of fast bowlers is a dream combination for any captain, adding that when Jasprit Bumrah returns from injury "we'll have one hell of a bowling attack to counter".

"These guys (our fast bowlers) are on top of their game, when they bowl, it looks like any pitch is a good pitch, Jasprit isn't here but this is a dream combination for any captain," Kohli said during the post match interview.

Kohli, 31, highlighting the importance of fast bowlers said that having strong fast bowlers is the most important thing for any team.

"Having strong bowlers the most important thing in any team. The numbers and records are there for everyone to see, that'll remain in the books, we haven't focused on it," Kohli said

Kohli was seen motivating young Mayank Agarwal from the dressing room during his whirlwind knock of 243 runs.

Explaining his gesture, Kohli said, "the mindset is simple, when you see a young guy coming in to bat, in Tests I know how much time it took me to get those big hundreds, so I know the importance of getting big runs. It's important as a senior batter to let them know to keep going.

"I want them to not make the mistakes I made as a youngsters to make them world class cricketers," he added.

India took a 1-0 lead in the two-Test series. They will next host Bangladesh for the day-night Test at the Eden Gardens in Kolkata starting from November 22.