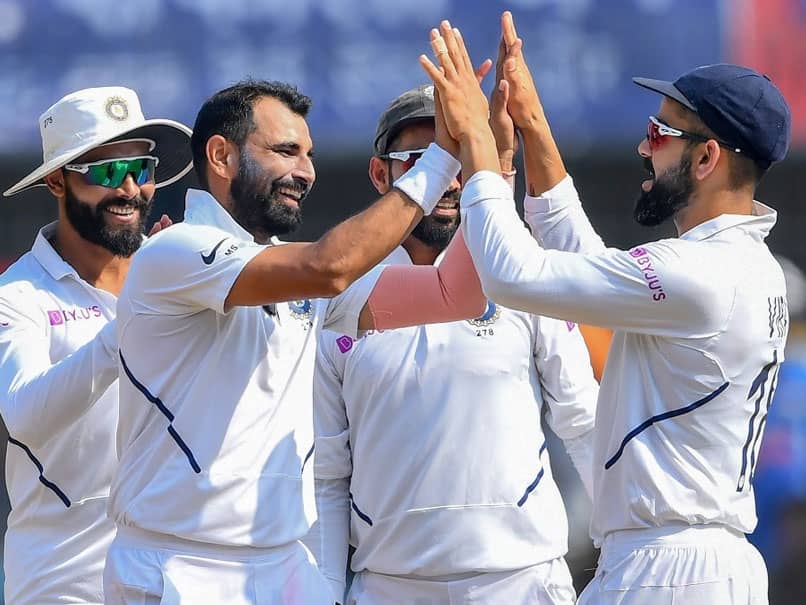 Ind vs Ban Score: Mohammed Shami was the pick of the bowlers in the first Test.© AFP

All-round India thrashed Bangladesh by an innings and 130 runs in the Indore Test on Saturday to register their sixth consecutive win in Tests. By the virtue of the victory, India took a 1-0 lead in the two-Test series. The second Test, which will be a day-night affair, will be played at the Eden Gardens in Kolkata from November 22. Mohammed Shami was the pick of the bowlers, taking four wickets while Ravichandran Ashwin took three as Bangladesh had no answers to India's bowlers. At Tea, India closed in on an innings victory over Bangladesh despite an unbeaten half-century from Mushfiqur Rahim. The visitors were 191 for six at tea on day three, still trailing India by 152 runs in their second innings. Mushfiqur and Mehidy Hasan were batting at the break after India declared their first innings at 493 for six overnight -- a lead of 343 runs. Bangladesh were bundled for 150 in their first innings. Fast bowler Mohammed Shami improved his match tally to six wickets after lunch, having Mahmudullah caught at slip for 15. Mushfiqur and Liton Das then put on 63 runs for the sixth wicket before Ravichandran Ashwin broke the stand. Mushfiqur, who was dropped by Rohit Sharma at second slip off Shami on four, completed his 20th Test fifty but fell to Ashwin for 64. India rode on opener Mayank Agarwal's 243 to pulverise the Bangladesh bowlers and amass 493 runs in the 1st innings. (SCORECARD)

Abu Jayed Live Score Live Cricket Score Live Blogs Cricket
Get the latest updates on IPL 2021, IPL Points Table , IPL Schedule 2021 , live score . Like us on Facebook or follow us on Twitter for more sports updates. You can also download the NDTV Cricket app for Android or iOS.