In most cases, the pitch invaders cause embarrassment for the organisers, cricketers and often the viewers too. 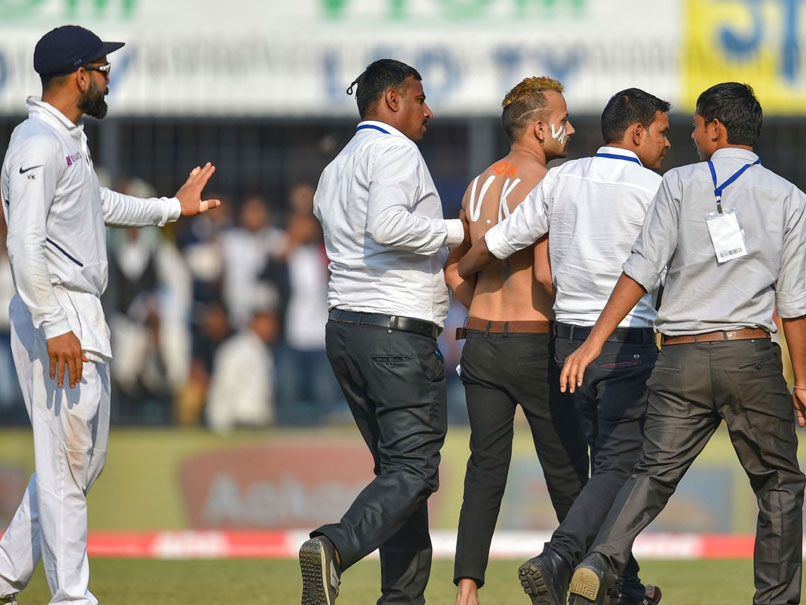 Virat Kohli is arguably the most followed cricketer in the world right now and wherever the Indian captain goes, fans follow him. They turn out in huge numbers to watch him play irrespective of the venue. Kohli must also enjoy the love and attention he gets from the fans as long as everything stays within a limit. On Day 3 of the first Test against Bangladesh in Indore, an ardent Virat Kohli fan jumped a fence during a drinks break and ran on to the playing field. The fan, with "VK" and number 18 painted on his back, tried to touch the feet of Indian cricketers but soon the ground security caught up with him. Virat Kohli then put his arm around the fan's neck while requesting the security personnel to be gentle with the pitch invader.

Kohli's kind gesture won hearts on the Internet. Here are some reactions.

Virat Kohli fan taking fandom to an another level...#INDvBAN pic.twitter.com/XyiT45jEXJ

Can any player show such gestures to his fan???

Whatta moment for the fan! ???

Dream for anyone, that Kohli putting his hand on ur shoulder and showing his love! ?? pic.twitter.com/PdYCGT5xOO

DEVASTATING FAN-Base OFF Field Too ...

Haters Think Just Think.. IF You See This Kind off Fans.. We Will Break You're Teeth and Thrash You're Face ??#Trollvk_haters | #ViratKohli | #INDvBAN pic.twitter.com/NZlHyNGzSD

U N B E L I E V A B L E??#ViratKohli #KingKohli #INDvBAN pic.twitter.com/V7yfhhoz8P

The incidents of pitch invasion are on a rise in India. In most cases, the invaders cause embarrassment for the organisers, cricketers and often the viewers too.

On Day Three of the second Test between India and South Africa in Pune, a fan had breached the security cover.

Sunil Gavaskar, who was on the commentary duty at that time, raised concerns about the security of players after that incident.

"These incidents happen because security people are not watching the crowd but are watching the match. This has been the perennial problem in India. The security is not there to watch the match for free. They are there to stop such interruptions from happening," Gavaskar had said.

"I say put the camera on the security and check whether they are watching the match or the crowd. This is a dangerous security issue which is what you are there for, to make sure no one goes into the ground. Anyone can cause damage to a player. It has happened in the past, why take a chance," Gavaskar had added.

As far as the series in concerned, India crushed Bangladesh by an innings and 130 runs inside three days to take 1-0 lead in the two-match rubber on Saturday.

Virat Kohli Cricket India vs Bangladesh, 1st Test India vs Bangladesh
Get the latest updates on India vs Australia and check out  Schedule, Results and Live Score. Like us on Facebook or follow us on Twitter for more sports updates. You can also download the NDTV Cricket app for Android or iOS.