Virat Kohli went past MS Dhoni to become the only captain with 10 innings wins under his name for the country. 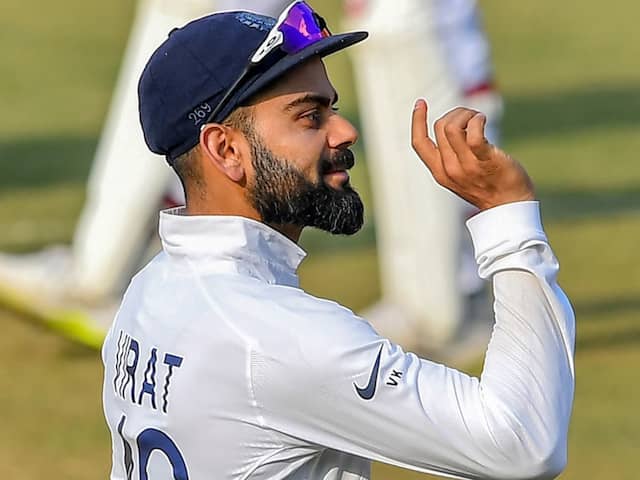 India defeated Bangladesh by an innings and 130 runs in the first Test.© AFP

Virat Kohli led India to an emphatic win over Bangladesh in the first Test in Indore on Saturday. This was India's sixth consecutive win in the longest format of the game. The hosts wrapped up the game inside three days, handing Bangladesh a huge defeat by an innings and 130 runs on Day 3. With the win, India registered their 10th victory by an innings under the leadership of Virat Kohli. It took Virat Kohli went past MS Dhoni to become the Indian captain with most innings wins under his name. Previously, former India captain, Dhoni had led the country to nine victories by an innings.

Mohammad Azharuddin and Sourav Ganguly are third and fourth in the list with eight and seven innings wins under their names respectively.

Rahul Dravid, Kapil Dev and Polly Umrigar have all won two matches by an innings while leading India in the longest format of the game.

In the Indore Test, Bangladesh were bowled out for 150 on the first day after opting to bat.

India then batted throughout the second day as Mayank Agarwal notched his second double century in Test cricket.

Bangladesh showed some resistance on the third day but were eventually bowled out for 213 in their second innings.

For India, Mohammed Shami was the star with the ball as he finished with match figures of seven for 58.

After the win, India have now extended their lead at the top of the World Test Championship.

India have six wins in six matches in the Test Championship so far and top the standings with 300 points.

MS Dhoni India vs Bangladesh Cricket
Get the latest Cricket news, check out the India cricket schedule, Cricket live score . Like us on Facebook or follow us on Twitter for more sports updates. You can also download the NDTV Cricket app for Android or iOS.