"Important To Be Neat And Tidy Behind The Stumps": Kumar Sangakkara Advises Rishabh Pant

Veteran Sri Lankan wicketkeeper Kumar Sangakkara said that if Rishabh Pant can improve his skills behind the stumps, he will be in a better position to help his captain on the field. 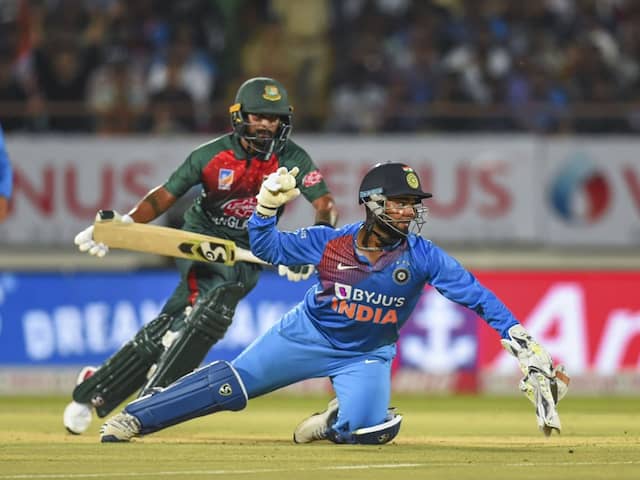 Rishabh Pant ran out Liton Das in the second T20I in Rajkot.© PTI

India defeated Bangladesh by eight wickets in Rajkot to level the three-match Twenty20 International series 1-1 on Thursday. While India were clinical in all departments of the game, Rishabh Pant's error behind the stumps caught everyone's attention. In the sixth over, Yuzvendra Chahal managed to beat Liton Das with the turn and it was an easy chance for Rishabh Pant behind the stumps but the delivery was declared a no-ball as Pant collected the ball in front of the stumps. After the young wicketkeeper missed an easy stumping chance, former Sri Lanka wicketkeeper-batsman, Kumar Sangakkara said that Pant needs to be neat and tidy behind the stumps.

"If you are looking at the World Cup it's important for him (Pant) to understand what his role is in terms of helping his captain with the right information," Sangakkara said.

"However, at the same time as a wicketkeeper, it's important to be neat and tidy behind the stumps which will give him confidence and put him in a better position to help his captain in calling for reviews," Sangakkara added.

In the T20I series opener in Delhi, Pant played a slow inning of 27 and was also involved in the mix-up between the wickets that led to Shikhar Dhawan's wicket who was batting on 41 that led to a lot of criticism on social media.

In the second T20I, Rohit Sharma was the star for India who scored 85 runs off just 43 deliveries to help India chase down the target of 154 runs with over four overs to spare.

The three-match series is level at 1-1 and the final T20I will be played in Nagpur on Sunday.

Kumar Sangakkara India vs Bangladesh Cricket
Get the latest Cricket news, check out the India cricket schedule, Cricket live score . Like us on Facebook or follow us on Twitter for more sports updates. You can also download the NDTV Cricket app for Android or iOS.