India vs Bangladesh: Nayeem Hasan was struck by a fiery Mohammed Shami bouncer on Day 1 of the pink-ball Test. 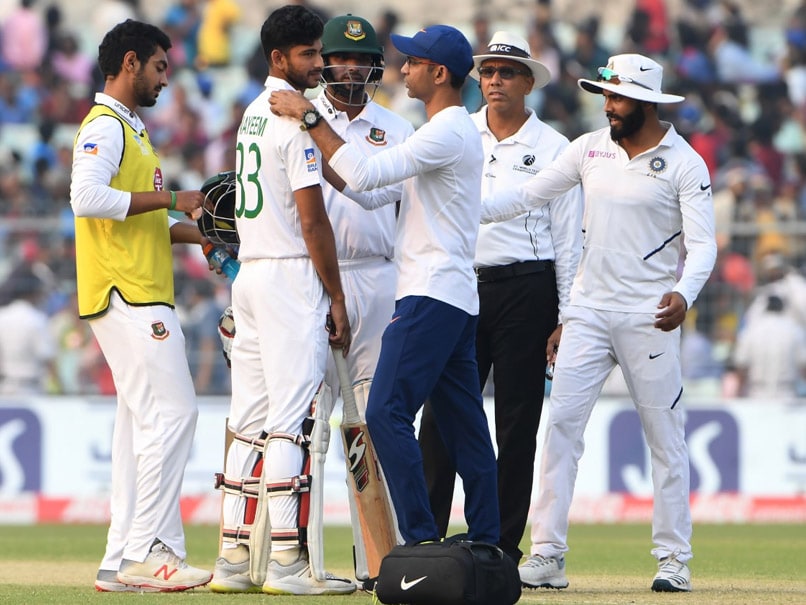 A sporting gesture of Team India physio to treat a Bangladeshi batsman on the opening day of the maiden pink-ball, day-night Test match earned praise from Twitter fans. The Board of Control for Cricket in India (BCCI) posted a clipping of the incident on Twitter and wrote: "In the end, it's all about the #SpiritOfCricket. #TeamIndia physio, Mr Nitin Patel attends to Nayeem (Hasan) after he gets hit on the helmet."

In the end, it's all about the #SpiritOfCricket.#TeamIndia physio, Mr. Nitin Patel attends to Nayeem after he gets hit on the helmet.#PinkBallTest pic.twitter.com/pFXsUfXAUY

One fan posted a picture of two fans of the two cricket rivals growling at each other and pointed out that this too happens.

One fan replied: "Indian players be like: We will hit and save as well."

Others wrote "Spirit of cricket is shown on field" and "This is what cricket is all about!".

A post read: "This approach is good: First hit and then treat. Jokes apart, Nice Gesture from Indian Team".

One fan lauded the "great gesture" and wrote: "Poor @BCBtigers in doldrums. 6 wkts down. 1 player concussed. Concussion sub gets hit on the helmet as soon as he comes out. This #PinkBallTest is best forgotten for Bangla players."

Eden Gardens India vs Bangladesh Cricket India vs Bangladesh, 2nd Test
Get the latest updates on Fifa Worldcup 2022 and check out  Fifa World Cup Schedule, Stats and Live Cricket Score. Like us on Facebook or follow us on Twitter for more sports updates. You can also download the NDTV Cricket app for Android or iOS.