Deepak Chahar finished with figures of six for seven as India outclassed Bangladesh with an emphatic 30-run win to clinch the T20I series. 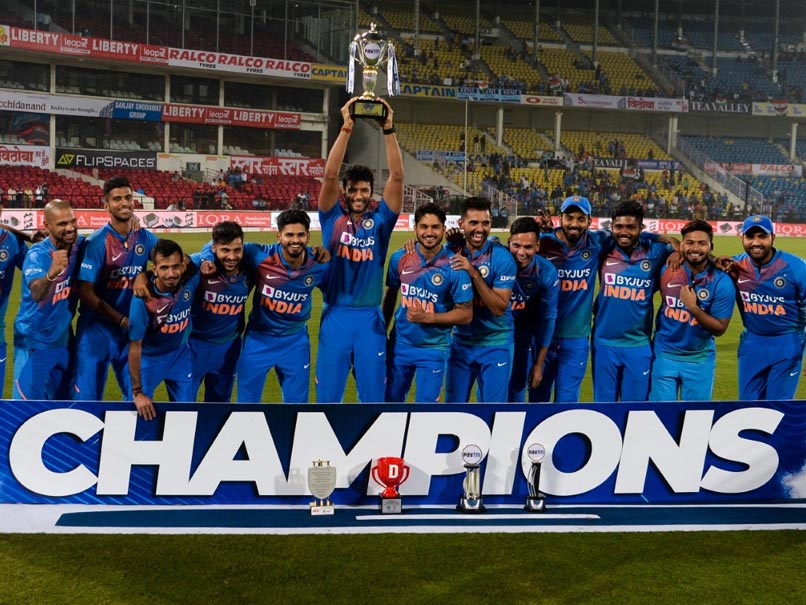 India defeated Bangladesh by 30 runs in the series-decider.© AFP

India defeated Bangladesh by 30 runs to clinch the three-match Twenty20 International(T20I) series in Nagpur on Sunday. Deepak Chahar was the star of the night as he claimed his first-five wicket haul in T20Is. In the process, Deepak Chahar also picked up a hat-trick to become the first male Indian bowler to achieve this milestone in the shortest format. Deepak Chahar finished the match with magical figures of 6/7.  Shivam Dube, playing his third T20I, also picked up three wickets as India bowled out the visitors for 144.

With the bat, Shreyas Iyer (62) went on to score his maiden half-century in T20Is and KL Rahul returned to form with a fluent knock of 52.

Earlier, Bangladesh won the toss and asked the hosts to bat. India were off to a poor start as Shafiul Islam knocked over Rohit Sharma in the second over. Shikhar Dhawan was looking good but in a bid to accelerate, he threw his wicket away for 19 runs.

KL Rahul and Shreyas Iyer then put on 59 runs for the third wicket to steady the innings for India. In the process, both batsmen scored half-centuries.

Late flourish from Manish Pandey helped India post 174 for five in their 20 overs.

Chasing 175 for the win, Bangladesh lost their first wicket for 12 when Deepak Chahar removed Liton Das for nine. Chahar followed up the good work and sent back Soumya Sarkar for a golden duck.

Mohammad Mithun and Mohammad Naim stitched together 98 runs for the third wicket. In the process, Mohammad Naim went on to score his maiden half-century in T20Is.

Just when the game was drifting away from India's grip, Deepak Chahar once again came to the home team's rescue and removed Mohammad Mithun for 27. Soon after, Shivam Dube joined the party as he sent Mushfiqur Rahim back to the pavilion for a golden duck.

Dube in the next over removed well-set Mohammad Naim for 81 and on the next ball he outfoxed Afif Hossain for a golden duck.

Chahar finished the game in the last over by picking up two wickets in two balls to bowl out Bangladesh.