India A finished the second day's play on 176 for 4 against Australia, still trailing by 293 runs with the visitors declaring their first innings on 469 for 7 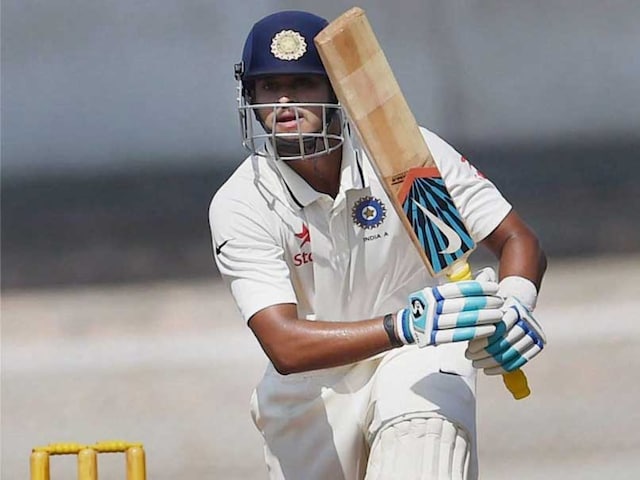 Shreyas Iyer made an impressive unbeaten 85 against Australia© BCCI

Shreyas Iyer made his mark on the Day 2 of the three-day practice game against Australia in a match where India A struggled to get their act together, both with the bat and ball. Iyer made an impressive 85 not out in a not so impressive batting display by the Indians who were reduced to 176 for four in reply to Australia's big first-innings total of 469 for seven declared. Navdeep Saini was the pick of the bowlers for India, returning with figures of two for 42 while Hardik Pandya, Shahbaz Nadeem and Akhil Herwadkar shared a wicket each.

Iyer could not have chosen a better platform to showcase his talent as his knock consisted of five sixes and seven fours in an almost run-a-ball innings to take India A to some sort of respectability at the end of the second day's play. Rishabh Pant was the other unbeaten batsman, having faced 93 balls in his 147 minutes stay at the crease. At stumps, India A still trailed by 293 runs.

The Mumbai-born started off in fine fashion by hitting off-spinner Nathan Lyon for a six of the very first ball he faced and from that point on there was no looking back for the 22-year-old.

Iyer gave just one chance, off Lyon, soon after reaching his half-century off 44 balls but otherwise dominated the Aussie spin duo of Lyon and left-armer Stepen O'Keefe, who was hoisted twice over the ropes by the youngster.

All the sixes were hit over long-on as Iyer, who is 15 runs short of his ninth first-class hundred in 38 games, used his feet to good effect.

Priyank Panchal made 36 with six fours in 77 minutes, but was beaten often by lanky Aussie pacer Jackson Bird.

The other opener Akhil Herwadkar struggled his way to four in 48 minutes. Ankit Bawne made an attractive but all-too-brief 25 in 39 minutes with four hits to the fence while skipper Hardik Pandya too got a start before departing late in the day for 19, caught behind off Bird.

Iyer and Pandya, dropped on 3 at first slip by Matt Renshaw off Bird, had consolidated the innings after the fall of Bawne with a partnership of 52.

For Australia, Lyon - although punished by Iyer - showed good form as he got purchase off the track to pick up 2 for 72 while Bird, easily the most impressive bowler for the visiting team, did not allow the batsmen any freedom and also got rid of Pandya to end with excellent figures of 2 for 15 in 11 overs.

In the morning, Mitchell Marsh and Matthew Wade utilised the one-off opportunity to hit individual half centuries, ahead of the Test series.

In reply, India A made 63 for two with openers Akhil Herwadkar (4) and Priyank Panchal (36) dismissed at the stroke of tea - both falling to off-spinner Nathan Lyon, who is expected to be the main spin bowler in the four-Test series commencing at Pune on February 23.

Earlier, Marsh made 75 during which he hit one six and 11 fours while the left-handed Wade scored 64 with nine fours in his 161-minute stay before getting out just before lunch against part-time bowler Herwadkar.

The visitors declared soon after Marsh drove left-arm spinner Shahbaz Nadeem straight into the hands of the mid-off fielder to become the only victim of the innings.

On the first day, skipper Steve Smith and Shaun Marsh hit individual hundreds while Mitchell Marsh and wicketkeeper Wade hardly looked in any trouble on the second day. The visitors would be pleased with the time spent in the middle by all the batsmen.

Australia declared when Glenn Maxwell and O'Keefe were at the crease with 16 and 8 respectively and in reply, the home team's openers Herwadkar and Panchal faced a testing time against Australia new ball bowlers Bird and Marsh.

Panchal, especially, was troubled by the movement extracted by Bird but managed to stay on only to see his partner Herwadkar offering a low return catch to Lyon.

Comments
Topics mentioned in this article
Australia Cricket Team Shreyas Iyer Steven Smith Shaun Marsh Hardik Pandya Brabourne Stadium, Mumbai India vs Australia 2017 Cricket
Get the latest Cricket news, check out the India cricket schedule, Cricket live score . Like us on Facebook or follow us on Twitter for more sports updates. You can also download the NDTV Cricket app for Android or iOS.