Test wicketkeeper Peter Nevill has been preferred to Matthew Wade in the 15-man Australia squad for the World Twenty20 while the selectors have chosen spinners Ashton Agar and Adam Zampa, though neither has played a T20 international. 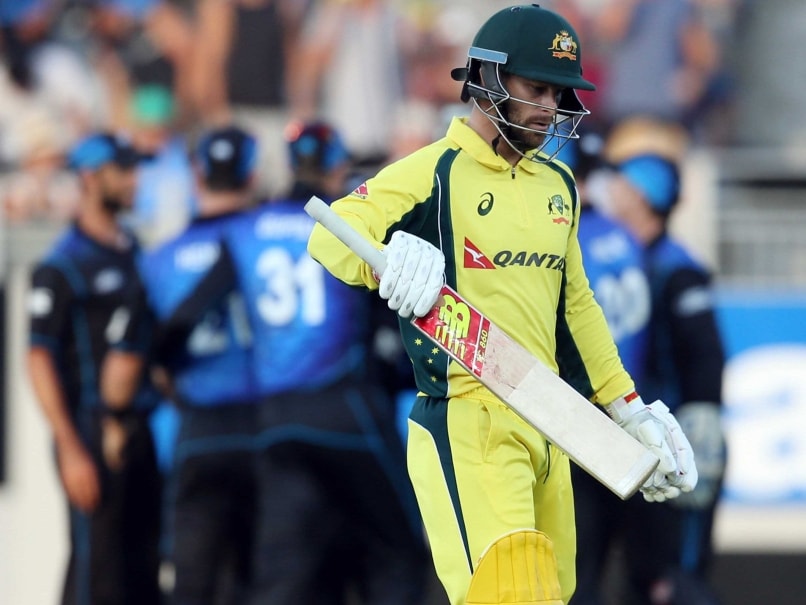 Matthew Wade has been Australia's wicketkeeper in T20 and ODIs since the retirement of Brad Haddin last year but appears to have paid the price for loss of form with the gloves and bat.© AFP
Melbourne:

Steve Smith has taken over from Aaron Finch who is struggling to recover from a hamstring injury and will now captain Australia in all three formats. Meanwhile, wicketkeeper Mathew Wade and Nathan Lyon were axed from Australia's squad for the World Twenty20 tournament in India next month while the selectors have chosen two spin bowlers who have yet to play a Twenty20 international. (New Zealand Give Brendon McCullum Memorable Send-off With Series Win Over Australia)

Test wicketkeeper Peter Nevill has been preferred to Wade in the 15-man Australia squad named Tuesday, though he has yet to represent his country in a limited overs match. (Smith Dismissal Triggers Debate on Channel Nine's Live Mike Chat)

Wade has been Australia's wicketkeeper in Twenty20 and one-day internationals since the retirement of Brad Haddin after last year's World Cup but appears to have paid the price for a loss of form with the gloves and bat.

The selectors have chosen left-armer Ashton Agar and legspinner Adam Zampa, though neither has played a Twenty20 international while test spinner Nathan Lyon has been overlooked.

Smith has replaced Finch who is struggling to recover from a hamstring injury, he suffered in the second Twenty20 against India.

"Aaron Finch has done a very good job captaining Australia in T20 cricket," chairman of selectors Rod Marsh said. "He will have benefited enormously from the leadership opportunity and will remain a highly-respected leader within the Australian squad.

"However, since he became T20 captain there has been a broader leadership transition in test and one-day international cricket with Michael Clarke retiring and Steve Smith assuming the captaincy in Test and one-day cricket.

"We think now is the right time for Steve to lead Australia in all three forms of the game as it offers us important continuity, not only ahead of the World T20 but beyond that tournament as well."

Finch has been named in the squad as has all-rounder James Faulkner, who also has a hamstring injury, and fast bowler Nathan Coulter-Nile who is recovering from a dislocated shoulder. Coulter-Nile displaces Shaun Tait but will have to prove his fitness before his selection is confirmed.

Nevill's selection ahead of Wade is a bold one. Nevill averages 15.75 and has a highest score of 25 in 20-overs matches, though his wicketkeeping is seen as likely to be superior to Wade's on low Indian pitches.

"We feel our batting depth in this squad is sufficient enough that we can have a specialist wicket-keeper in the squad," Marsh said. "We want Australia's best wicketkeeper playing in this tournament and we consider Peter Nevill to be the best in the country right now."

Spin bowling is expected to be an important part of the tournament with many nations selecting three frontline spinners. Australia have gone with Agar and Zampa ahead of the more experienced Lyon and Cameron Boyce with backup from all-rounder Glenn Maxwell.

Marsh said the selection of an off-spinner, left-armer and legspinner gives Australia "plenty of flexibility in the slow-bowling department which is incredibly important in this format".

"Given the conditions we are likely to face in India we wanted to have a number of different spinning options available to us," he said.

"Overall, we believe the squad we have selected is well-balanced and has the experience and talent required to be successful in India and help us win the World T20 title for the first time.

"We were able to look at a number of players during the BBL and the recent T20 international series against India and have selected the best short-form players available for the conditions we will encounter."

The World Twenty20 title is the only major global cricket trophy to have eluded Australia, who open their campaign against New Zealand in Dharamsala on March 18.

Comments
Topics mentioned in this article
Australia Cricket Team World T20, 2016 Steven Smith Aaron Finch Nathan Lyon Peter Nevill Ashton Agar Matthew Wade Cricket
Get the latest updates on IPL Auction 2023 and check out  IPL 2023 and Live Cricket Score. Like us on Facebook or follow us on Twitter for more sports updates. You can also download the NDTV Cricket app for Android or iOS.