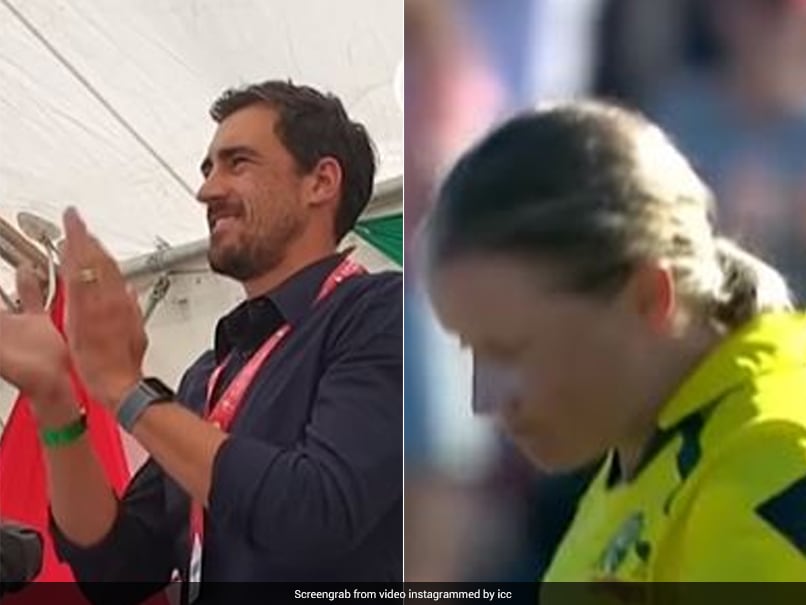 Australia opening batter Alyssa Healy was at her scintillating best as she scored 170 against England in the ICC Women's World Cup final on Sunday to help her side post 356/5 in the allotted 50 overs. As a result of this knock, the right-handed batter posted the highest individual score in a Women's World Cup final. Australia pacer Mitchell Starc who is also the husband of Alyssa Healy was in attendance for the match and was seen applauding when Healy brought up her ton.

The ICC posted a video on their official Instagram handle and captioned the post as: "Happiness is......cheering for your spouse at the #CWC22 final."

With this 170-run knock, Healy broke the record of Karen Rolton for registering the highest individual score in the final of a Women's World Cup.

Her teammate Rachael Haynes is in second spot in the list as she registered 497 runs in the 2022 Women's World Cup in New Zealand.

In the summit clash against England, Healy was dismissed in the 46th over but it was not before she scored 170 runs to propel Australia's score.

In the ongoing contest, England won the toss and asked Australia to bat first. Healy and Haynes then put on 160 runs for the opening wicket.

Beth Mooney also provided ample support to Healy in the middle and the duo added 116 runs for the second wicket and their partnership was broken in the 46th over by Anya Shrubsole as she got the better of Healy.

Mitchell Starc Rachael Haynes Cricket
Get the latest updates on IPL Auction 2023 and check out  IPL 2023 and Live Cricket Score. Like us on Facebook or follow us on Twitter for more sports updates. You can also download the NDTV Cricket app for Android or iOS.