U-19 World Cup: Captain Dunith Wellalage put on a inspiring performance with both bat and bowl as Sri Lanka won the game with ease. 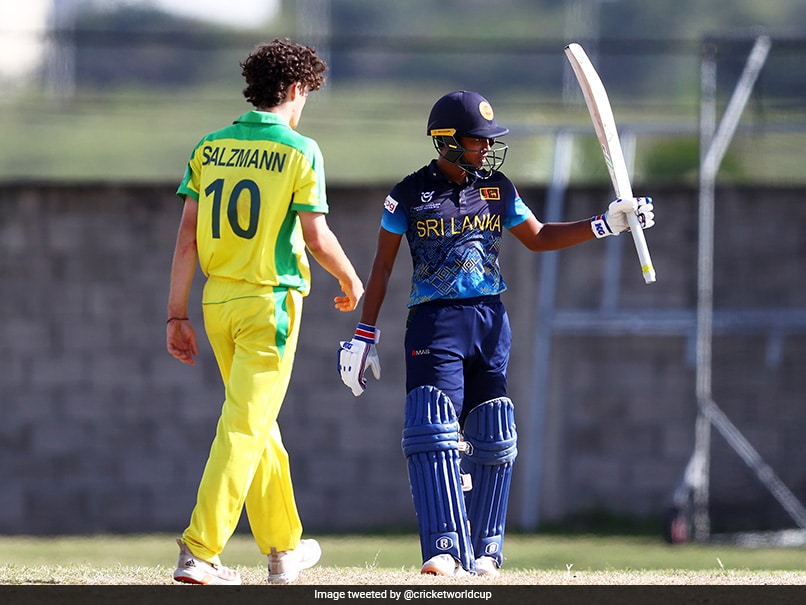 Sri Lanka on Monday defeated Australia by 4 wickets in their second match of the ongoing U-19 World Cup at the Conaree Sports Club, Basseterre, St Kitts. Captain Dunith Wellalage put on a inspiring performance with both bat and bowl as Sri Lanka won the game with ease. After putting Australia to bat first, the Sri Lankan skipper took five for 28 as Australia's middle-order completely crumbled in St Kitts, before they were eventually bowled out for a total of 175.

Campbell Kellaway did score a fine half-century but his knock of 54 wasn't enough for Australia as rest of the batters failed to impress against a disciplined Sri Lanka bowling attack.

Chasing a target of 176, Sri Lanka won the game with four wickets and 13 balls to spare as Wellalage capped-off a brilliant individual performance by scoring a fifty (52).

Sri Lanka were reeling at 49 for four at one point before Wellalage and wicketkeeper Anjala Bandara got their run-chase back on track, adding 70 runs for the fifth.

After their dismissals, Ranuda Somarathne chipped in with a valuable 32-run knock as Sri Lanka eventually won the game with ease.

With this win, Sri Lanka retained the top-spot in Group D with two wins, while Australia are in third behind West Indies, who defeated Scotland in the other fixture.

Sri Lanka will now face the hosts West Indies in their final group game on January 21 in St Kitts while Australia will face Scotland on January 19 in a bid to secure a place in the next round.

Sri Lanka U19 Dunith Wellalage Campbell Kellaway Anjala Bandara Ranuda Somarathne Cooper Connolly Cricket ICC Under 19 World Cup 2022 Australia Under-19 vs Sri Lanka Under-19, Match 10
Get the latest updates on IPL Auction 2023 and check out  IPL 2023 and Live Cricket Score. Like us on Facebook or follow us on Twitter for more sports updates. You can also download the NDTV Cricket app for Android or iOS.