Ravi Kumar gave India a flying start in the ICC U19 World Cup final against England on Saturday as he bagged two wickets in a fiery opening spell. 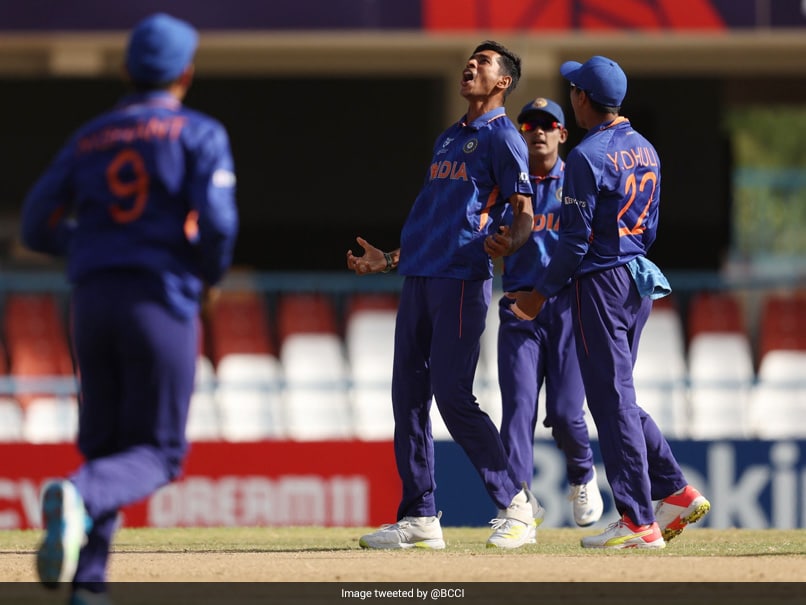 Ravi Kumar gave India a flying start in the U19 World Cup final against England on Saturday.© Twitter

Ravi Kumar gave India a flying start in the ICC U19 World Cup final against England on Saturday as he bagged two wickets in a fiery opening spell. Ravi struck in the very first over of his spell as he removed Jacob Bethell for lbw for an individual score of 2 runs. In his very next over, Ravi sent England captain Tom Prest back to the pavilion for a duck after castling him. The young Indian pacer generated some movement at the Sir Vivian Richards Stadium in North Sound, Antigua as the English top-order struggled to deal with him. Ravi had impressive figures of 3-1-11-2 from his opening spell. He eventually finished with figures of 4/34 as India bowled England out for 189, with Raj Bawa bagging a five-wicket haul.

Here is a video of the two wickets Ravi claimed in the early proceedings on Saturday.

Both India and England are playing an unchanged side in the title clash. The two finalists had set up the summit showdown without losing a match.

In the semi-finals of the tournament, India defeated Australia while England got the better of a valiant Afghanistan side.

India had been hit by COVID-19 in the early stages of the tournament, with skipper Yash Dhull being among the players who had tested positive before recovering.

England U19 Ravi Kumar Jacob Bethell Tom Prest Cricket
Get the latest updates on ICC T20 Worldcup 2022, check out the Schedule and Live Score. Like us on Facebook or follow us on Twitter for more sports updates. You can also download the NDTV Cricket app for Android or iOS.