Raj Bawa now holds the record of the highest individual score by an Indian batter in the U-19 World Cup, surpassing Shikhar Dhawan's score. 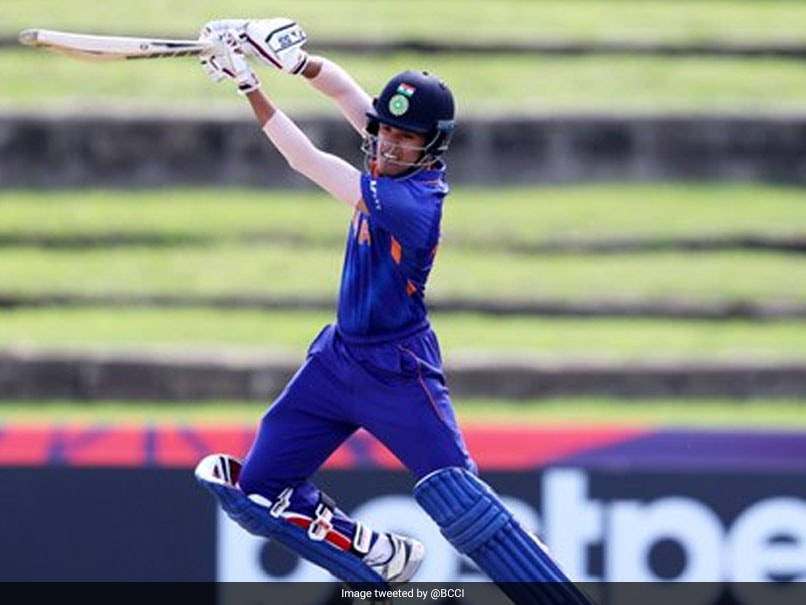 India's Raj Bawa smashed an unbeaten 162 against Uganda in the U-19 World Cup on Saturday.© Twitter

Raj Bawa top scored for the Indian team with his unbeaten 162-run knock as India posted 405/5 vs Uganda in 50 overs in their last group stage match in the ongoing ICC U-19 World Cup in Trinidad on Saturday. Bawa now holds the record of the highest individual score by an Indian batter in the U-19 World Cup. Earlier, the record was held by Shikhar Dhawan who scored 155 runs in the 2004 edition of the tournament against Kenya. Bawa was well supported by Angkrish Raghuvanshi who returned after adding 144 runs to his name. The duo added 206 runs for the third wicket against Uganda. This is also the second time that the Indian team scored more than 400 runs in an innings. India's 405-run total is the highest by any team at this edition of the U-19 World Cup.

The highest score by Indian side in the Under 19 World Cup is 425 that came in the very same match in 2004 where Dhawan scored 155.

India have already booked their spot in the quarterfinals and if they win this clash then they will finish the group stage as the table-toppers.

Earlier in the tournament, the Indian camp was hit by multiple COVID-19 cases that forced their regular skipper Yash Dhull to sit out of the previous game and also this one.

India are the most successful team in the history of the tournament as they have won the title on four occasions.

Last time in 2020, the Priyam Garg-led Under 19 team finished as runners-up, with Bangladesh winning their maiden ICC title.

Uganda Under 19 Raj Angad Bawa Angkrish Raghuvanshi Cricket
Get the latest updates on IPL Auction 2023 and check out  IPL 2023 and Live Cricket Score. Like us on Facebook or follow us on Twitter for more sports updates. You can also download the NDTV Cricket app for Android or iOS.