ICC U-19 Cricket World Cup: Vicky Ostwal registered a match-winning five-wicket haul for India in their Group B opener against South Africa. 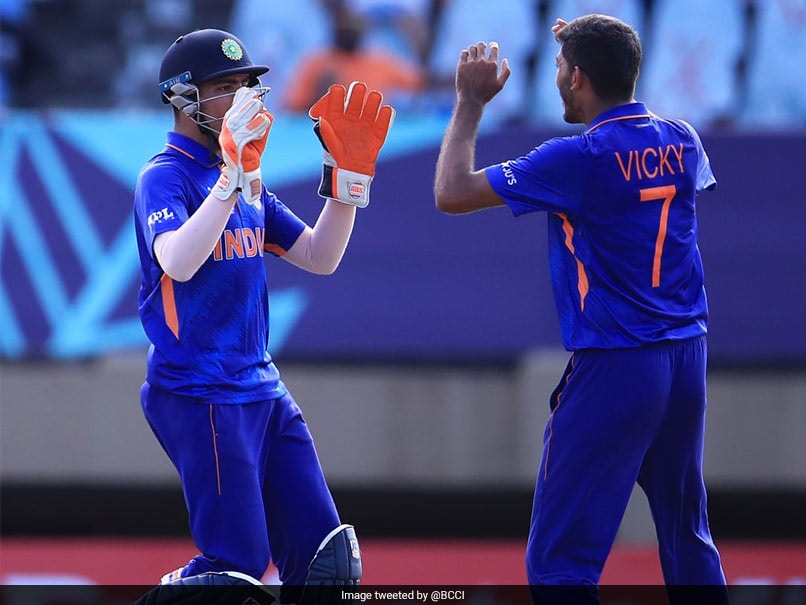 Vicky Ostwal was in brilliant form during India's opener against South Africa in the ongoing ICC U-19 Cricket World Cup. The left-arm spinner registered a five-wicket haul as India went on to win the match by 45 runs in Guyana. In 10 overs, Ostwal only conceded 28 runs and was one of the main architects of India's victory. The Cricket World Cup's official Instagram handle shared the highlights of Ostwal's brilliant performance and captioned it as, "Relive the sensational match-winning spell of 5/28 from Vicky Ostwal".

Other than Ostwal's performance, captain Yash Dhull also put in a talismanic batting display. He smashed 82 off 100 balls as India went on to post 232 in 46.5 overs.

Chasing a target of 233 runs, South Africa were bowled out for 187 in 45.4 overs with Ostwal cruising past their batting order.

After the win, India are on top of Group B with two points and are followed by Ireland (2) in second place. Uganda (0) are in third position, followed by South Africa (0) at bottom of the table.

For their next game, India will be up against Ireland on January 19 at the Brian Lara Cricket Academy in Tarouba.

South Africa U19 Vicky Ostwal ICC Under 19 World Cup 2022 India Under-19 vs South Africa Under-19, Match 4 Cricket Social
Get the latest updates on IPL Auction 2023 and check out  IPL 2023 and Live Cricket Score. Like us on Facebook or follow us on Twitter for more sports updates. You can also download the NDTV Cricket app for Android or iOS.