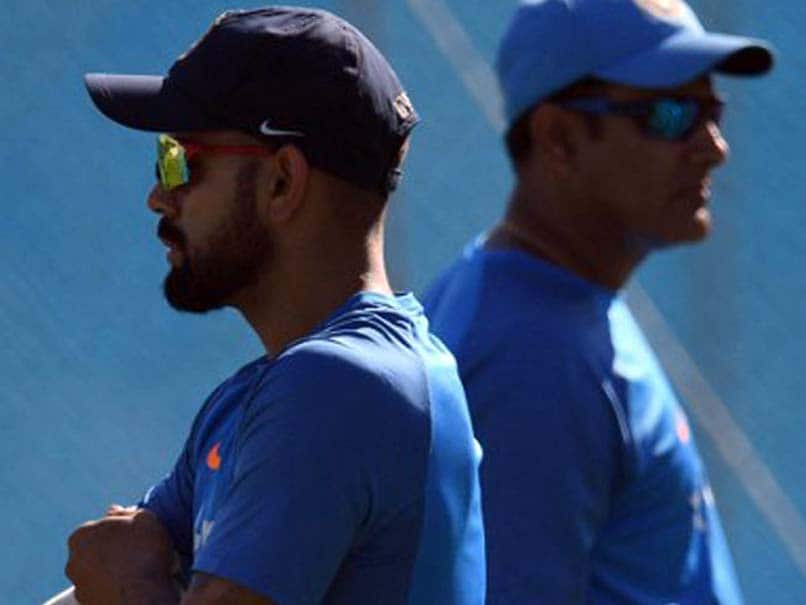 Kumble and Kohli shared 'cold vibes' after the warm-up match against Bangladesh.© AFP

The acting secretary of Board of Control for Cricket in India (BCCI), Amitabh Choudhary, and BCCI's General Manager (Cricket), MV Sridhar, had a meeting with the members of the Indian cricket team on Thursday on the vexed Anil Kumble issue. However, the outcome of the meeting is yet to be known. Sources suggest that the meeting was held with some of the players to discuss about Kumble and find out if there is any discontent. While any talk of a 'rift' between India captain Virat Kohli and Kumble have been categorically denied by Choudhary, the cricket board in any case has sent a three-man team to England to address the issue.

At a time when Indian cricket fans want the team to stay focused ahead of the Pakistan match, Bangalore Mirror has reported that Kumble and Kohli shared 'cold vibes' after the warm-up match against Bangladesh.

That's not all. As the legendary leg-spinner approached the nets with some equipment, the Indian captain walked away.

The BCCI has earlier issued a press release asking for applications for the post of Head Coach for the team, the deadline for which ended on Wednesday.

The Supreme Court-appointed Committee of Administrators (CoA) is trying to broker peace between Kumble and Kohli but the differences are "almost irrevocable".

The three officials in England are CoA head Vinod Rai, Choudhary and Sridhar.

Comments
Topics mentioned in this article
India Cricket Team Virat Kohli Anil Kumble ICC Champions Trophy 2017 Cricket
Get the latest updates on ICC Women's Cricket World Cup 2022 and IPL 2022, check out the Schedule , Live Score and IPL Points Table. Like us on Facebook or follow us on Twitter for more sports updates. You can also download the NDTV Cricket app for Android or iOS.