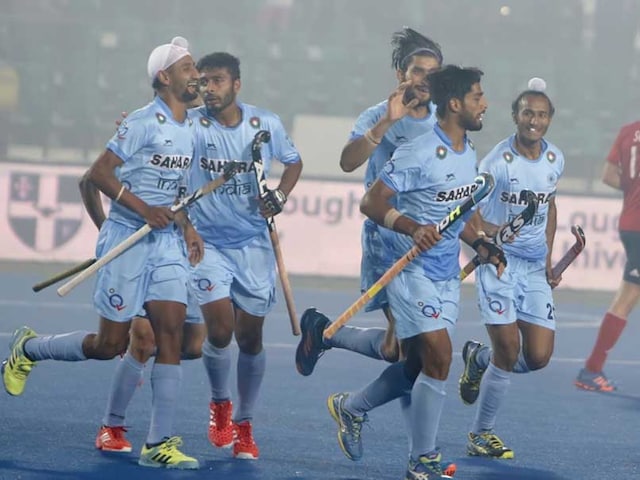 India have won all their matches at the Junior Hockey World Cup.© Hockey India

Favourites India maintained their unbeaten run at the Junior Hockey World Cup and eked out a fighting 2-1 win over a spirited South Africa in their final Pool D match to book a place in the quarterfinals in Lucknow on Monday.

India scored both their goals from field efforts through skipper Harjeet Singh (11th minute) and Mandeep Singh (55th), while Kyle Lion-Cachet (28th) found the net for the Africans.

India, thus, finished the pool engagements with possible nine points from three wins and will now face second placed team in Pool C, Spain in the quarter-finals on Thursday.

India scored the first goal in the 11th minute when skipper Harjeet scored with a slap shot after being set up by Manpreet (Jr's) hard work from the left flank.

Pepped up by the goal, India stepped up the pressure and managed to secure their first penalty corner six minutes later but Harmanpreet Singh's effort was saved by South African goalkeeper Siyavuya Nolutshungu.

After sitting back for most part of the first half, South Africa came into the groove and earned their first penalty corner in the 27th minute. Kyle Lion-Cachet scored with a powerful low flick to the right of Indian keeper Vikas Dahiya.

Minutes later, Gurjant Singh came tantalisingly close to restoring India's lead but his reverse hit from close range went just wide. With a minute remaining for half time, India secured a second penalty corner but this time Harjeet fumbled to stop the push and the two teams went into the break locked at one-goal apiece.

The Indians continued in the same vein after the change of ends and had another shot at the South Africa goal in the 45th minute. Gujrant set it up for Nilkanta Sharma whose shot from inside the circle was brilliant parried away by the South African custodian.

Desperate for a win in front of a cheering home crowd, India restored their lead in the 55th minute through a brilliant strike from Mandeep.

Mandeep pounced on Harjeet's diagonal pass from outside the circle and then unleashed a fierce reverse hit to beat the South African goalkeeper all ends up.

Besides India, England qualified for the quarterfinals from Pool D as the second best team although they have one more match remaining against lowly Canada tomorrow.

Pre-tournament favourites Australia and Belgium comfortably secured their berths in the quarterfinals with resounding wins over their respective opponents.

While Australia defeated surprise element Austria 4-1 in Pool A, Netherlands thrashed lowly Egypt 7-0 in a Pool B fixture.

With two wins from as many matches, Australia are leading Pool A with six points and they are set to top the pool even if they lose against Korea in their final match.

Argentina, who beat Korea 5-1 in another Pool A match, narrowly scrapped past Austria to qualify for the quarterfinals because of a better goal difference.

Both Argentina and Austria finished their pool engagements with four points from three games but the former sailed through by virtue of two-goal advantage.

Belgium, on the other hand, finished on top of Pool B with an all-win record followed by Netherlands, who ended second with six points from three matches.

Belgium defeated Malaysia 3-0 to register their third consecutive win in the tournament.

In the opening match of the day between Australia and Austria, Joshua Simmonds (4th minute), Lachlan Sharp (24th), Blake Govers (45th) and Jack Welch (46th) scored for the winners while Austria's goals came from the sticks of Phillip Schippan (8th) and Franz Lindengrun (67th).

Irrespective of the result of their last pool match, Australia will play Netherlands while Belgium will be up against Argentina in the quarter-finals scheduled for Thursday.