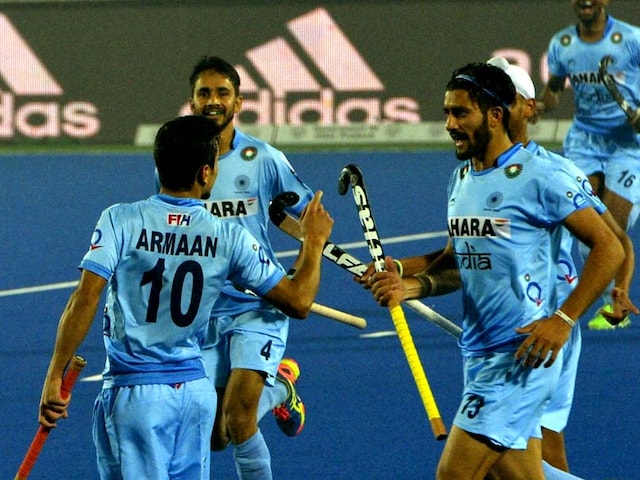 India have scored nine goals in their two games so far.© PTI

Aiming to make the quarterfinals with an all-win record, favourites India would look to iron out the chinks in their armoury when they take on South Africa in their last Pool D match of the men's Junior Hockey World Cup in Lucknow on Sunday.

With two handsome wins over Canada (4-0) and England (5-3), the Indians colts have virtually secured their place in the quarterfinals and would need only a draw to guarantee their spot.

Going by present form and their stature in world hockey, the Indians are favourites to win the fixture against South Africa, which will help the team enter the business end of the tournament with its confidence intact.

India are presently leading Pool D with maximum six points from two games but both England  and South Africa are still in the hunt with three apiece.

Even if India lose they are front-runners to qualify for the quarters as they enjoy a goal difference of six compared to their opponents and only a defeat by a huge margin can dash their hopes.

That scenario looks highly unlikely and going by the situation, India and England are expected to qualify for the last-eight round from the pool. England will fancy their chances against minnows Canada in their last pool match on Tuesday.

As indicated by the team's head coach Harendra Singh, India would be looking to utilise the match against South Africa to iron out their flaws.

Harendra's statement came after India conceded two goals in the last 10 minutes of the match against England, courtesy unnecessary fouls that resulted in two yellow and two green cards.

"We have to accept that they are youngsters who wait four years for a big tournament so excitement will always be there. But the fouls were unnecessary. We need to control our emotions. Better that it has happened here but we can't afford such mistakes in the knockout stage," Harendra had said.

The Indian colts made significant improvements in their game with each passing day, and that was visible in their game against England.

Captain Harjeet Singh is leading by example and was the most impressive player in the match against England, creating uncountable chances for his strikers.

The drag-flicking duo of Harmanpreet Singh and Varun Kumar too seemed to be in good form while Armaan Qureshi, Parvinder Singh and Mandeep Singh have been impressive upfront.

But the Junior World Cup is an unpredictable tournament as most of the teams don't know about each other much.

India's coach Harendra, however, is not too much worried about the fact.

"It's good that we didn't play against South Africa because when you don't know the enemy there is nothing to think about. We just need to concentrate and stick to our game. We should be confident that whoever is our enemy we can defeat them. Our team can deal with any team," a confident Harendra said.

A win tomorrow will help India take a giant stride towards reclaiming the title after 15 long years and that too on its home soil.

A win will propel India to the top of Pool D, which means they will probably play either Spain or New Zealand, who are expected to finish  in the second place in Pool C behind six-time champions and title holders Germany.

Meanwhile, in other matches, Australia will play dark horse Austria (Pool A), Argentina will face Korea (Pool A), Netherlands will be up against minnows Egypt (Pool B) and Belgium will square off against Malaysia (Pool B).